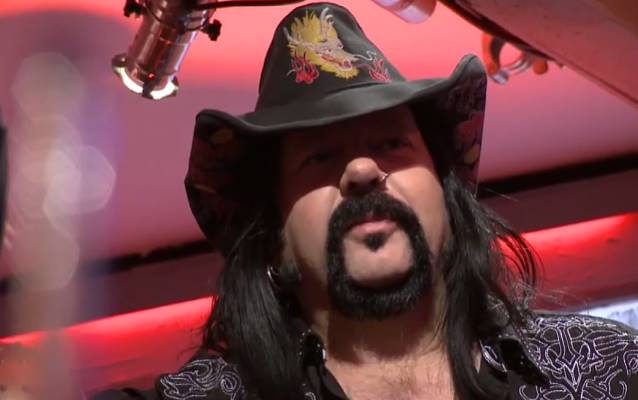 VINNIE PAUL: PANTERA Is 'Bigger Now Than It Ever Was'

On December 12, Sid Black of the 94.3 KILO radio station in Colorado Springs, Colorado conducted an interview with former PANTERA and current HELLYEAH drummer Vinnie Paul Abbott. You can now listen to the chat using the audio player below. A couple of excerpts follow (transcribed by BLABBERMOUTH.NET).

On why he thinks PANTERA's music has endured for so long:

Vinnie: "I just think it was real. The music was real. It touched people on a lot of levels. The people that followed us back then still follow us, except now their kids follows us. The band's bigger now than it ever was back then. And it's accepted now. Back then you never heard 'Walk'; it wasn't a hit. We never had a hit on the radio. But now, you can walk into any sporting event and hear PANTERA songs, and you can hear it on your radio station now. It's really accepted now, whereas back then it was kind of almost the world's biggest underground band, you know."

On how he managed to stay in the music business for so long:

Vinnie: "I love playing music, man, and I have a drive in me, and that's something that I really wanna do. And I've never gone away from it long enough for people to forget about me; I'm always part of it. So I'm just happy that I get to make music that I wanna make, that I get to play in a great band that I'm really proud of right now, and I'm just looking forward to this [HELLYEAH headlining] tour coming up next, man."