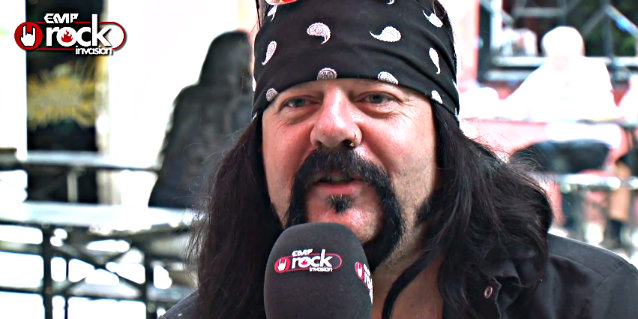 VINNIE PAUL: People Who Continue To Ask About PANTERA 'Reunion' Are 'Selfish'

"People are selfish, man," Vinnie replied (see video below). "They want what they want; they don't care what you want. And it's unfortunate that people go, 'Oh, wow, man, they can get Zakk Wylde to jump up there on stage and it's PANTERA again.' No, it's not, you know. It's not that simple. If Eddie Van Halen was to get shot in the head four times next week, would everybody be going, 'Hey, man, Zakk, go play for VAN HALEN. Just call it VAN HALEN.' You see what I'm saying? I mean, it's really selfish for people to think that, and it's stupid. It's not right at all."

Asked if he ever feels pressure with HELLYEAH to live up to the immense legacy of PANTERA, Vinnie said: "Never, because it's a different band. If you played for a soccer team and you get traded to another soccer team, you're gonna kick ass for that soccer team just like you did the other one. You may not achieve the same goals, or you may achieve higher goals; you never know. But that's what happens when you change teams and do different things."