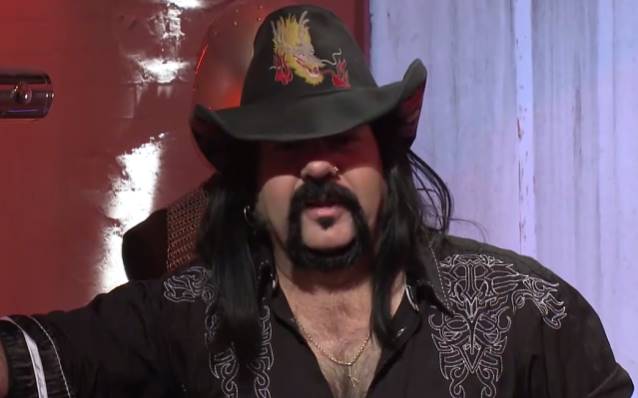 In a brand new interview with Metal-Rules.com, former PANTERA and current HELLYEAH drummer Vinnie Paul Abbott was asked how he deals with constant comparisons between HELLYEAH and his previous bands, PANTERA and DAMAGEPLAN.

"It's not hard for me to deal with because I'm not in those bands anymore, I'm in HELLYEAH," he said. "You know, it's the same thing as Jimmy Page or Robert Plant, they're always gonna be known as the guys from LED ZEPPELIN. It doesn't matter what they do outside of that.

"You know, it's a good legacy to have but people do have to realize that that was then and this is now.

"A lot of people get hung up on living in the past and I'm not doing that. I'm living for today and for tomorrow.

"What I did back then was amazing, it was great and I'm hoping to achieve that again with this.

"It's a much different day and age, it's more difficult and harder, but I'm willing to do it.

"A lot of people being from a band like I was wouldn't come play a place like this [the Underworld in London, England, where the interview was conducted], they'd say 'Fuck that! I'm not gonna do that. I've been there and done it.' But I love it. It's a challenge, its fun."

Asked how he would describe HELLYEAH as a band today and if anything has changed since the start, Vinnie Paul said: "Well, the reason why we started the band was to get back into music for the reason we started in the first place — the love of music.

"When you're in a band like MUDVAYNE or PANTERA, they turn into a business after a while and the fun goes away from it because it's a lot of fuckin' work.

"I try telling people all the time — try being married to one person for any length of time, much less four or five other guys in the band, [and] you know that's what it's like. You really have to learn give and take and how things work.

"But HELLYEAH, right now with the new guys in the band, it feels like why we started again — the people love making the music. The other two guys in the band [bassist Bob 'Zilla' Kakaha and guitarist Greg Tribbett] were bad business people, they didn't take care of things, and they had issues that really started weighing us down and bringing us down. But we're done with that, we're over that and it feels great again, man. Kyle [Sanders, bass] has so much energy on stage Chris [Christian Brady, guitar] has so much energy and it really complements what the three of us (the core of us) put together from the start."