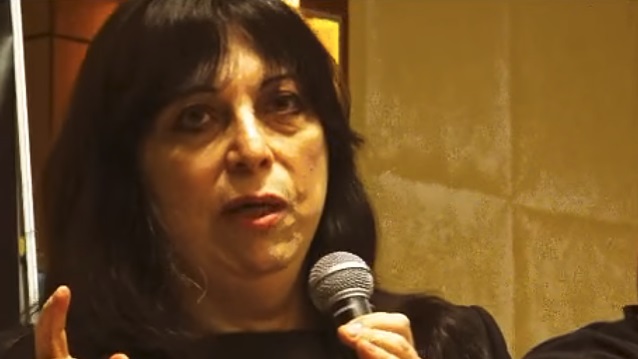 Vinnie Vincent says that former VINNIE VINCENT INVASION singer Mark Slaughter is a "no-talent individual" who reduced his music "to the level of worse than a local bar band."

Slaughter joined VINNIE VINCENT INVASION as the replacement for former JOURNEY frontman Robert Fleischman, who provided vocals on VVI's 1986 self-titled debut album. After Fleischman exited the band, a video was produced for the song "Boyz Are Gonna Rock" with Slaughter lipsyncing over Fleischman's vocal track. With Slaughter on board, the band released its second album, "All Systems Go", in 1988.

During a question-and-answer session this past Sunday (January 21) at the Atlanta Kiss Expo, Vincent never mentioned Mark Slaughter by name but made it clear that he does not look back fondly on his collaboration with the current SLAUGHTER frontman.

"Rob and I built a palace on that first record, and that was the design, the architecture," Vinnie said (see video below, courtesy of Kale Adams). "Where Rob and I should have gone would have been like this [raises his hand up in the air] always, always, always, always, because he was very talented, and together, we were the perfect team. It was like when I worked with [KISS members] Paul [Stanley] and Gene [Simmons] and Eric [Carr] — we were the perfect team; we had a chemistry that was absolutely incredible. And that's how Rob and I were. It was a lot of regret, because we know that we could have gone on to do so much and we didn't."

Calling what happened with the VINNIE VINCENT INVASION "sickening," Vinnie went on to suggest that various online accounts of the circumstances that led to the band's breakup were far from the truth. "Everybody has self-serving narratives — whatever suits them the best that makes them look good; they tell you bullshit to make themselves look good," he said.

According to Vinnie, one "bullshit story" out of "hundreds of lies that [are] out there" is the myth that he got kicked out of his own band. "What really happened was I tried to keep Rob in the band, because I said, 'There is no fucking way — no way, no way — this other guy, who can't sing, who's reduced my music to the level of worse than a local bar band is gonna be in my creation. There's no way,'" he said. "And [VINNIE VINCENT INVASION's record label] Chrysalis had changed management and they were changed to quickly cash in on the young kid that appeals to the teenyboppers. I said, 'You do something else like that, but don't put him here. 'Cause that will never happen. So you need to get Rob in and keep this…'

"That's what they fell in love with, the record company fell in love with that, so for them to destroy my creation was disgusting," Vincent continued. "And they had new people in, and they said, 'That's okay. We just want a quick cash-in on something.' And I said, 'Either you keep my creation with Rob or I quit. I don't wanna be on this label.' [And they told me] 'You can't quit. We will can the record. We will not do this. We will not do that.' And they said, 'You owe us two records right now.' So they said, 'You have to finish this tour. You can't stop anything, because the machine is moving, and this is a big record.' So I had management that was not looking out for Vinnie, he was looking out for himself, and everything changed. So once I began to tour, I said, 'How quick can I get out of this? This has to end now.' And they said, 'You cannot end it now. You have to go through one more record, you have to do the tours, and then we have another option that we, the record company, will pick up, for record number three.'"

Vinnie says that by the time "All Systems Go" was released, it was clear that the magic that made the band's debut LP special was gone. "The first record, all the rock magazines at that time were saying, 'Oh, this is the best fucking record that has come out in so long. Oh my God! This thing is hot, hot, hot!' Because it was different from the records that were out," he said. "At that time, there was nothing like it. They were all either JUDAS PRIEST type of records or they were POISON type of records, but there was nothing like VINNIE VINCENT INVASION. So the radio stations jumped on it, 'cause they said, 'What the hell is this?' And everybody loved that record. It sold big and it sold fast. Once this no-talent individual came into the picture, everything went 'Boom!' It was just like dropping a lead weight. And I saw that happen and I thought, 'This is a sin.' Everything that could have been was insantly over. So we recorded the 'Boyz Are Gonna Rock' video with a faker; it was like fake news — trying to make you believe something that… this is not what this is. So one thing led to another, to another, got worse and worse. I did the second record, and I had all these great songs that I said should sound like the first record, only this is the second record. It follows the same everything — the same sound, the same passion, the same intensity, the same power, and it was not there."

In a 2013 interview with Legendary Rock Interviews, Mark Slaughter said that he enjoyed his time in VINNIE VINCENT INVASION. "I think that Vinnie is absolutely brilliant and I think that as much as he would slam me in the press, I would have to say that he is a genius in so many ways," he said. "At the same time, I think the second-guessing became his downfall because he is always thinking, 'It's gotta be better, it's gotta be better.' The thing is, art is never finished, it's abandoned and you have to have the right place to abandon it in order to continue doing it. When he's in that place, he becomes so engulfed in it that he just doesn't stop."

Mark also had his own theory as to why he fell out of favor with Vinnie in the years that followed VINNIE VINCENT INVASION's split. "I think Vinnie had a vision of where he wanted the INVASION to be and it wasn't with the lead singer having so much… Let's put it this way; I don't think I was his supposed choice, so to speak; I think it was something that worked at the time," he said. "When we finished 'All Systems Go', he was absolutely in love with the project, and then after the band went sour, he resents the day, and I went back to being the wrong choice, so to speak."

Despite everything that's been said, Mark insists that he still looks back on those years and has "great love for them" and has no ill feelings toward Vinnie. "I just think we're just two different people," Mark said. "I think he’s a great talent. I think he should still be making records. I think instead of talking about the record we made in 1987, I think he should just make a new record and be that person just making new music. I think he needs to take whatever he's working on and finish it because if you don't finish it, if you don't abandon that art and you just keep laboring on it, what happens is it becomes a hybrid of what it once was. Vinnie has plenty of music in him."