Vinnie Vincent will re-release his 2002 instrumental album in a limited edition of 1,000 CDs.

The former KISS guitarist's official web site is accepting pre-orders for this "historic" re-release of "Speedball Jamm", priced at $250.00 apiece. Each CD will come with a limited-edition autographed 8x10 photo and a "BIG" guitar pick. The discs are expected to ship in February 2020.

"Speedball Jamm" — previously issued under the title "Archives Volume 1" — has been described as "a single 70-minute track of blistering guitarmageddon." According to Rarebird's Rock And Roll Nest, the song "is divided into ten not-very-distinct parts. It's a subterranean-sounding recording of Vinnie jamming endlessly on a lead guitar at high speed, sometimes solo, sometimes with the accompaniment of bass and drums."

Vincent — who was a member of KISS when the band publicly "unmasked" in 1983 — made several public appearances last year after spending the past two decades out of the public eye.

In 1983, KISS wrote and released "Lick It Up" — their first album without makeup — a recording on which Vincent co-wrote eight of 10 songs, including the title track, which remains a staple of the group's live performances to this day.

In 1992, Vincent re-teamed with Simmons and Stanley to write three songs for their acclaimed album "Revenge", including the record's first two singles, "Unholy" and "I Just Wanna". Their relationship quickly soured once again, however. Four years later, Vincent released a solo EP, "Euphoria", which featured vocals by former VVI singer Fleischman and included material from sessions recorded around 1990. Soon after that, Vincent vanished from the public eye and remained off the grid for more than two decades.

Vincent recently announced that he will host "Vinnie Vincent's Merry Metal Christmas" on December 14 and December 15 at S.I.R. Studios in Nashville, Tennessee. 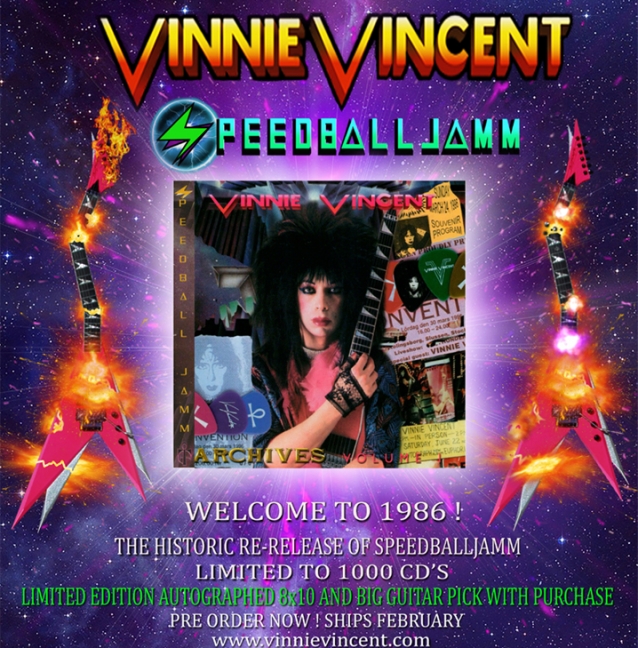