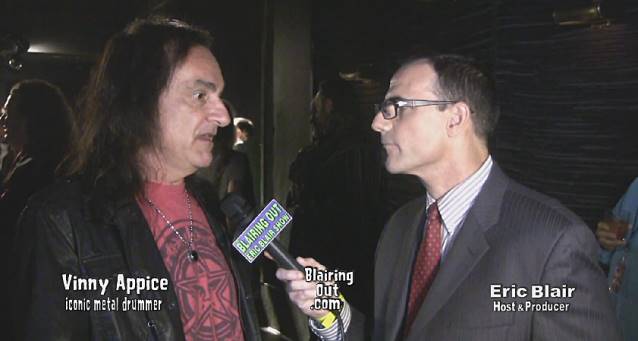 Legendary drummer Vinny Appice (BLACK SABBATH, HEAVEN & HELL, DIO, LAST IN LINE) was interviewed by Eric Blair of "The Blairing Out With Eric Blair Show" at this past Monday's (March 17) exclusive VIP listening party for the Ronnie James Dio tribute album "This Is Your Life" and awards gala at the Avalon in Hollywood, California. Check out the chat below.

In a recent interview with The Rockpit, Vinny spoke about LAST IN LINE, his band featuring original members of DIO alongside singer Andrew Freeman. "We're going to do some more dates [this] year," he said. "That started off as just some fun with some cool stuff with Jim [bassist Jimmy Bain] and Vivian [Campbell, guitar] and Claude [Schnell, keyboards]. We had some time off, and got together to jam, and I recommended the singer, Andy Freeman, a good friend of mine. He sang with me with George Lynch on a tour we did, so he came down and tore it up. We ended up doing three or four shows in L.A. and Vegas, and we did the big Loud Park festival in Japan in October [2013], and that was incredible; people were going crazy. We know those songs, we wrote those songs, and we have a singer that sings his ass off with passion; he's not trying to be Ronnie [James Dio], but he just really kicks it! It's going really, really good."

Vinny Appice has anchored the rhythm and power live and in the studio for the music of DIO, BLACK SABBATH, HEAVEN & HELL, WWIII, AXIS, Rick Derringer, John Lennon, and more. He has recorded and co-written songs on over 25 albums and CDs, including many multi-platinum records. Vinny's drumming can also be heard on numerous movie soundtracks, including "Wayne's World 2", "Heavy Metal", "Iron Eagle" and "Bedazzled". Vinny, the author of drum instruction book "Rock Steady" and DVD "Hard Rock Drumming Techniques", has performed incredible powerhouse drum clinics around the globe. Numerous books have been written about BLACK SABBATH and DIO with the authors always mentioned Vinny's unique powerful drumming style.