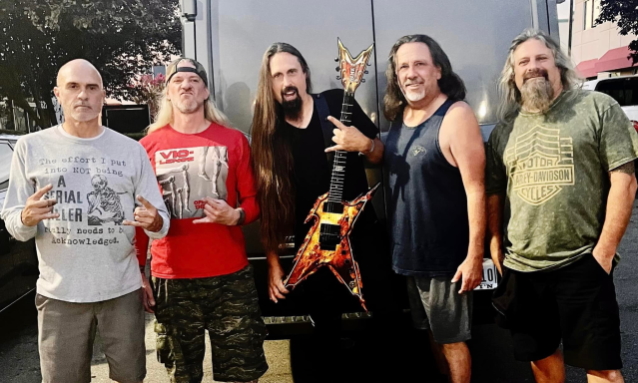 San Francisco Bay Area thrash metal veterans VIO-LENCE have recruited Ira Black (LIZZY BORDEN, METAL CHURCH) to play guitar for the band on their upcoming European tour. Black will be filling in for founding VIO-LENCE guitarist Phil Demmel, who is currently on the road with LAMB OF GOD as the temporary replacement for Willie Adler.

Earlier today (Thursday, August 4),Ira took to his Facebook page to write: "The cats out of the bag! I will be filling in for my brotha Phil Demmel in VIO-LENCE for the upcoming 2022 dates starting at the Brutal Assault Festival on August 9th, Alcatraz Metal Festival on the 13th, the South America run in September and winter European tour! This is going to be a blast and I'm truly honored!

"VIO-LENCE is a legendary Bay Area thrash band and I've known them for many years. I've had a great time learning Phil's parts, rehearsals are going great, these guys are the real deal! I'm looking forward to slaying it for the VIO-LENCE fans around the world. See you out there!"

Demmel first confirmed that he would miss some VIO-LENCE shows this past March during an appearance on "Talking Bollocks", the monthly metal podcast hosted by ACID REIGN frontman-turned-stand-up-comedian Howard H. Smith. Demmel, who at the time was touring the U.S. with OVERKILL as the temporary replacement for Dave Linsk, said: "There's some VIO-LENCE stuff coming up that I'm not gonna be able to be a part of because of choices that I'm making in my own career.

"VIO-LENCE was a side thing that we were doing. It was understood that I'm doing other stuff and that this would happen," he continued. "They weren't looking at doing full-blown tours, so trying to schedule stuff, it gets difficult. So there will be things that I won't be doing with VIO-LENCE, which is a little heartbreaking in the sense that… I'm the only member of VIO-LENCE that hasn't missed a show. So, yeah, there's a VIO-LENCE club and there's been a lot of former members. But I never quit the band. I carried that torch the whole time and hadn't missed a show."

Demmel went on to say that "it's a selfish move" on his part "to do these other things, but at 55 years old, I need to not regret passing up something to do another thing that may or may not… It's hard to explain. So I'm apologizing in advance for, if there will be a [VIO-LENCE] show that I'm not gonna be at," he said. "But I am 55. I'm in the twilight — maybe in the twilight of my musical career. You never know when it can all… A lot of peers that are… Plenty are dying, dude; they're just gone. And at this point in my career, I need to be a little selfish. And it might be hard to fathom from other people about doing things that aren't part of what VIO-LENCE is… It's emotional and it sucks, but it is what it is. It's not like I'm missing the whole year or anything, but there will be instances when I'm not on stage with those guys, and it's gonna be weird. It is what it is."

The cats out of the bag! I will be filling in for my brotha Phil Demmel in Vio-lence for the upcoming 2022 dates...