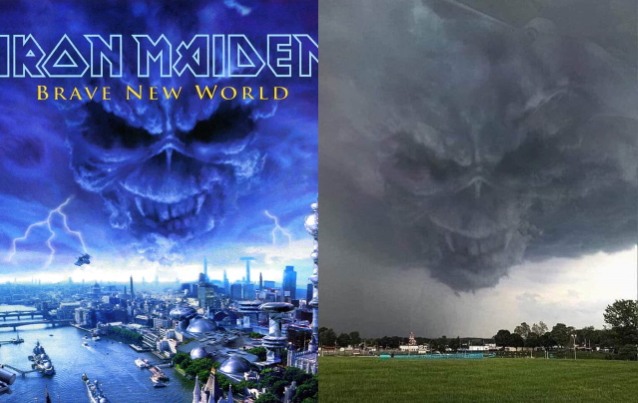 According to USA Today, an image on social media purporting to show a skull face formed by clouds during the recent storms in Arkansas is actually a doctored image combining an IRON MAIDEN album cover with a photo of a 2019 storm in Pennsylvania.

A December 10 Facebook post containing the altered photo was accompanied by a caption claiming: "my sister took a picture of this today in lake village Arkansas while I was fixing her roof. look at the detail of this picture. if u turn the picture upside down and zoom in on it you'll see Jesus in the middle with his arms wide open.. people if this is not a good enough sign then y'all better get right with the lord... it's so crazy how he gives us signs but we're to blind to see..."

The post was shared nearly 6,000 times within a week.

The same photo was previously posted on Facebook in June 2019 by someone claiming it was "a real picture taken in California" with "no edit". That time, the post was shared more than 164,000 times.

As USA Today points out, grinning, skull-like face in the manipulated image comes from the cover design for MAIDEN's "Brave New World" while the image of the clouds during a storm was taken from the web site of Pennsylvania's The Patriot-News a newspaper, capturing a May 2019 storm over Kutztown University.

As it has become easier than ever to edit photos and videos, fake or manipulated images shared on social media have the capacity to deceive, emotionally distress, and influence public opinions and actions.

Generally speaking, who are more familiar with photo editing techniques are better equipped to identify fakery.

If an image has been recirculated from another web site, or repurposed for whatever disaster has most recently struck, they can be discovered with a reverse image search using Google Images.

my sister Sam Lumley took a picture of this today in lake village Arkansas while I was fixing her roof. look at the...

This is a real picture taken in California 🤷‍♀️ wow, is all I can say!! No edit 😱