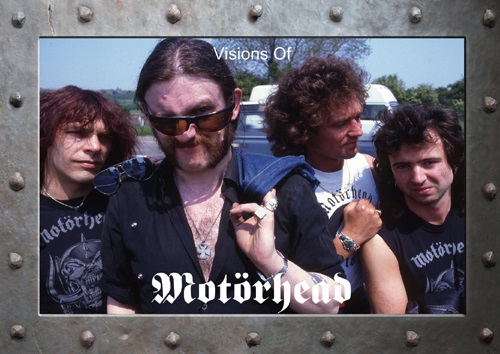 'Visions Of Motörhead' Unauthorized Photographic Book Due In April

Due on April 20 via Wymer Publishing, "Visions Of Motörhead" is a 128-page photographic book of largely unpublished, never-before-seen MOTÖRHEAD images that bring together a mixture of concert photos and off stage shots from the late '70s through to the late '80s, covering the classic era with Phil Taylor and Eddie Clarke through to the four-man lineup with Phil Campbell, Würzel and Pete Gill. Photos are mainly from the collections of concert photographer Alan Perry and press photographer Tony Mottram who photographed the band on numerous ocassions for Sounds and Raw magazines. The book also includes personal recollections of one of the stage hands who helped build the stage for the open air festival at Port Vale football ground that complements the photos from that gig.

The never-before-seen images include shots from recording sessions and video shoots plus back stage at the tenth anniversary gig at Hammersmith, June 1985. There are even some hilarious photos of Lemmy during a beer-tasting session and many more of the band's legendary frontman as you have never seen him before.

Fans who order before March 24 will have their names printed within a dedicated page in the book.

According to Wymer, "Visions Of Motörhead" "has not been authorized or approved by MOTÖRHEAD or their management."