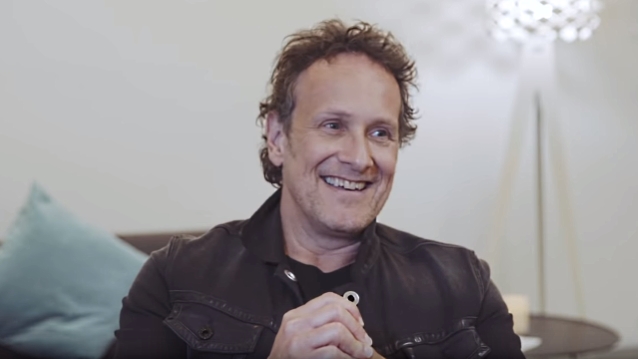 DEF LEPPARD guitarist Vivian Campbell spoke about the band's decision to record a a heavy cover of DEPECHE MODE's "Personal Jesus", at Spotify's studio for the streaming service's "Spotify Singles" series. The track was also included on DEF LEPPARD's latest greatest-hits collection titled "The Story So Far - The Best Of", which was released in November.

"Mike sent out an e-mail to all of us, asking us to come up with an idea of a song, a cover song, for the Spotify sessions," Vivian explained (see video below). "They wanted a classic DEF LEPPARD song, which we decided was gonna be 'Hysteria', and something that was a little bit outside of our genre — not a hard rock band. Don't be covering AC/DC or something like QUEEN or whatever. My first choice was ABBA. I thought that we would rock the hell out of ABBA because of our vocals. So I wrote back to everyone. I said, 'Knowing Me, Knowing You' by ABBA. I think we could do a good rock version of it. Plus, there's a little harmony line in it, an instrumental line, that would have been a great rock guitar line. I know it's a bit of a happy song, but I think we could have darkened it up a bit. Anyway, that got shot down in flames. But, fortunately, my second suggestion was, 'Why don't we do 'Personal Jesus' by DEPECHE MODE?' And everyone picked up on that. So, we did it. And, to be honest, it was probably a much, much easier song to do than anything by ABBA. But I still think we could rock the shit out of ABBA. Someday."

"The Story So Far - The Best Of" was made available in multiple configurations: a 2-CD set comprised of 35 tracks, 1-CD set comprised of 17 tracks, 2-LP vinyl, and digital. Among a blockbuster track listing loaded with timeless smashes, all four versions feature three new songs, including "Personal Jesus", "Rock On (Remix)" and the original holiday song "We All Need Christmas". As a bonus for collectors, the first pressing vinyl copies of "The Story So Far" feature an exclusive seven-inch single of "Personal Jesus" and "We All Need Christmas".

DEF LEPPARD will be inducted into the Rock And Roll Hall Of Fame this spring. The honor comes after the British rockers got the most votes in the Rock Hall's online fan poll.

The 34th annual Rock And Roll Hall Of Fame induction ceremony will be held March 29 at Brooklyn, New York's Barclays Center. HBO will broadcast a truncated version of the ceremony later in the year.