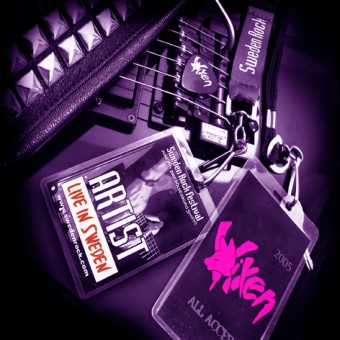 VIXEN will release its first-ever live album, "Live in Sweden", on October 8 via Castle. The CD was recorded at the Sweden Rock Festival in 2005 and features live recordings of the hit tracks "Love is a Killer" and "Edge of a Broken Heart", among many others. The track listing is as follows:

The cover art and photography was done by VIXEN's very own Lynn Louise Lowrey.

VIXEN will return to the U.K. for a tour in November and will also make an appearance at the Hard Rock Hell festival.

Kuehnemund reformed VIXEN in 2001 for the Voices of Metal tour with a lineup that had to be revamped 10 dates into the tour. Undeterred, with less than a month of rehearsals, the three new members — vocalist Jenna Sanz-Agero, drummer Kat Kraft, and bassist Lynn Louise Lowrey — successfully finished the tour and the lineup of VIXEN has been solid ever since.

Watch professionally filmed video of VIXEN performing "Edge of a Broken Heart" at the Sweden Rock Festival in 2005: