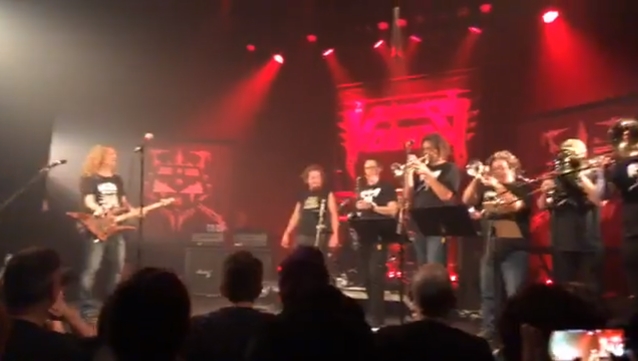 Canadian metal innovators VOIVOD performed at the world-famous Montreal International Jazz Festival (Festival International de Jazz de Montréal) on June 30 at Club Soda. For the occasion, guitarist Dan "Chewy" Mongrain, who has been in VOIVOD for the past eight years, wrote an eight-minute arrangement for the brass quintet that joined the band onstage during the show for a special feature on "The End Of Dormancy" from VOIVOD's Juno award-winning album "The Wake" (2018). This was a world premiere, as VOIVOD had not played that song live before, and it is believed that no other metal band in the world had ever been joined by a brass quintet during a performance.

You can see video footage of the concert below.

"The Wake" is one of 40 albums which have made the Polaris Music Prize 2019 Long List. VOIVOD was also nominated for the "International Artist Of The Year" award at this year's Progressive Music Awards, which will be held on September 12 at the Underglobe in London, England.

"The Wake" came out in September 2018 via Century Media Records. The disc was recorded and mixed by Francis Perron at RadicArt Recording Studio in Canada. The album's artwork was once again created by VOIVOD drummer Michel "Away" Langevin.

VOIVOD and REVOCATION will join forces for a North American co-headlining tour in the fall. PSYCROPTIC, SKELETAL REMAINS and CONJURER will join as additional support.