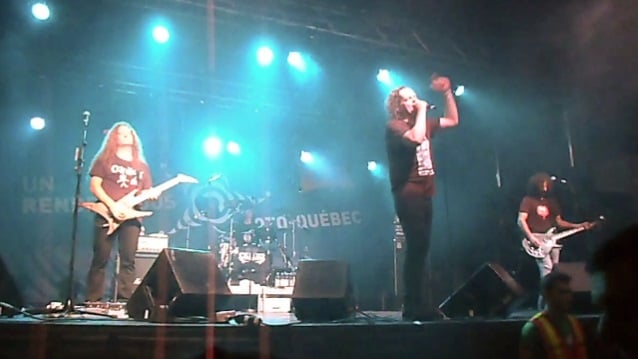 Canadian metal innovators VOIVOD have tapped Dominic "Rocky" Laroche to play bass for the band following the departure of Jean-Yves Thériault (a.k.a. Blacky). Laroche, who has previously performed with blues musician Steve Hill, made his live debut with VOIVOD last night (Saturday, July 12) at Festival Jonquière En Musique in the group's former hometown of Jonquière, Quebec, Canada. A photo taken at the show, along with video footage, can be seen below (performance photo courtesy of the Jonquière En MusiqueInstagram account and photographer Steve Dallaire). Another picture is available at this location.

Prior to VOIVOD's performance at Festival Jonquière En Musique, Thériault (who did not attend the event),along with fellow founding VOIVOD members Denis Bélanger (a.k.a. Snake; vocals),Michel Langevin (a.k.a. Away; drums) and the band's late guitarist Denis D'Amour (a.k.a. Piggy),were honored as international ambassadors of La Ville de Saguenay (of which Jonquière is a suburb) and will have their names inscribed on a plaque describing the history of the group, to be installed permanently at the Nikitoutagan Square in Jonquière.

"You have thousands of fans who have travelled all around the world to see you perform for over 30 years," Saguenay Councillor Jonathan Tremblay said. "You are rock stars whose homeland is right here. We are extremely proud of you."

"I am very excited," Bélanger said about the honor. "It's amazing for us to experience this because we are not accustomed to receiving honors. But we are very touched and grateful to be recognized in this way."

Langevin reassured fans that VOIVOD will continue despite the departure of Thériault.

"Dominic Laroche will play with us at the Heavy MTL festival with METALLICA on August 9, and then we will write a new album, which will probably be released next year," he said. "In the meantime, we will continue playing shows."

VOIVOD on Friday released a statement claiming that Blacky "decided to leave the band for his own personal reasons."

Blacky originally left VOIVOD in 1991 for personal reasons, and went on to co-found The Holy Body Tattoo Dance Society, a now-defunct award-winning Canadian contemporary dance company, which existed from 1992 to 1999. He composed, produced and engineered the scores for "White Riot", "L'Orage", "Poetry & Apocalypse", and "Our Brief Eternity".

In a 2003 interview Metal Update, VOIVOD drummer Michel Langevin (a.k.a. Away) vowed that Blacky would never rejoin the band, explaining: "Unfortunately, we don't really get along with Blacky. He is the one who will never be back in the fold. I know that it would please the hardcore fans and everything, but it just won't happen. The circumstances of his departure were really hurtful. It has a lot to do with childhood friendship and broken trust. I don't think we can patch it up, actually. It's too bad. It really got to the bottom of the barrel with the 'Angel Rat' recordings. We were not too sure about the final result of the album, but our approach was just, 'Okay, let's keep going and next time we'll do better,' you know? But it didn't happen like that with Blacky, and the way he left the band was really, really awful. But it's something that we never discuss in the press and it's an obscure part of the VOIVOD story. It's just that the breakup was so sour."