VOIVOD's "Hypercube Sessions" began last August with a blazing live set from RadicArt studios, the studio where the Canadian metal innovators recorded their Juno award-winning album "The Wake", and continues with "Hypercube Session 2", where the band will perform "Nothingface" for the first time ever on May 30. The date also coincides with Michel "Away" Langevin's 58th birthday. "Hypercube Session 3" will feature the classic "Dimension Hatröss" album and will stream on June 27.

Both shows will be available for 48 hours after the initial broadcast. Don’t miss these unique performances by one of metal's most acclaimed and innovative bands. The exclusive event will include an afterparty live chat with the band hosted by "Vox&Hops".

Ticket options for each session are available for purchase below:

VOIVOD released a new live album, "Lost Machine - Live", in November via Century Media Records. The disc was recorded in Québec City during the worldwide touring cycle for "The Wake".

Last summer, VOIVOD released a new three-track 12-inch vinyl and digital EP titled "The End Of Dormancy" via Century Media Records. The EP is centered around a special "Metal Section" version of the title track (off VOIVOD's latest album, "The Wake") with added trumpets, saxophone and trombones. The complementary songs on this release are exclusive live versions of "The End Of Dormancy (Metal Section)" and the group's classic "The Unknown Knows", recorded at Montreal Jazz Fest 2019.

"The Wake" was released in September 2018 via Century Media Records. The disc was recorded and mixed by Francis Perron. The album's artwork was once again created by Away. 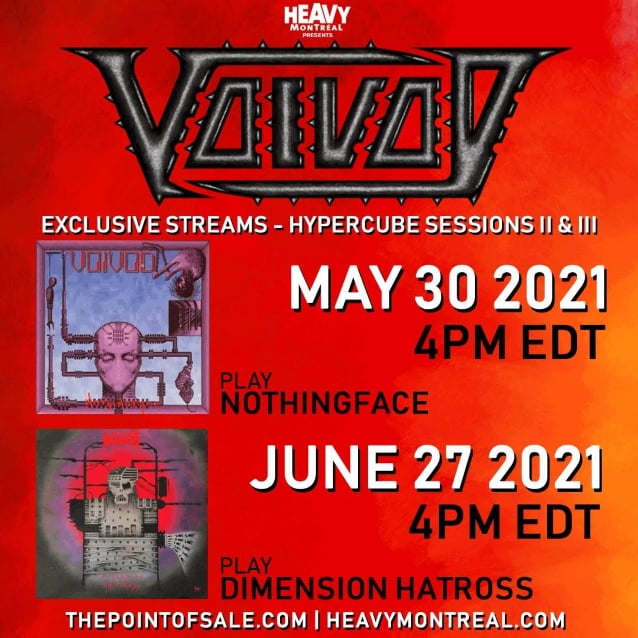