VOIVOD To Release 'The Wake' Album In September

Commented VOIVOD drummer Michel "Away" Langevin: "We are thrilled to let you know that our new album, 'The Wake', is completed! The music is like a futuristic prog thrash metal trek with many twists and turns, and the story involves the usual Voivodian topics: disasters, chaos, conflicts, strange plots and alternate consciousness. We are excited with the result and can't wait to get the material out to you this fall! Also, try to catch us when we tour Europe in September and October. It will be a great opportunity for the band to test some songs from our upcoming album."

Langevin told the Impact metal channel that the band's next record would be "a concept album, very intricate. It's very progressive thrash. Lots of psychedelia as well. The songs are pretty long. There is only one short rocker; all the rest is progressive music. It's a continuation of [2016's] 'Post Society' [EP]."

VOIVOD singer Denis "Snake" Bélanger told Metal Wani about the passing of Piggy and the eventual addition of Daniel "Chewy" Mongrain prior to the making of "Target Earth": "Of course, the loss of Piggy was a terrible thing. We couldn't do, really, anything for two or three years; we didn't know what would be the future of the band. And we finally found a guy [Chewy] that could play VOIVOD [music]. And it's sort of a mixture of circumstances that happened. It's, like, 'Okay, maybe there's a light at the end of the tunnel. Maybe if we pick up this guy who learned, actually…' The first thing [Chewy] learned [to play] was VOIVOD. The first show he saw was VOIVOD. And the [day after] he saw VOIVOD, he bought a guitar and started playing Piggy's riffs. So, for us, Chewy was the best option." 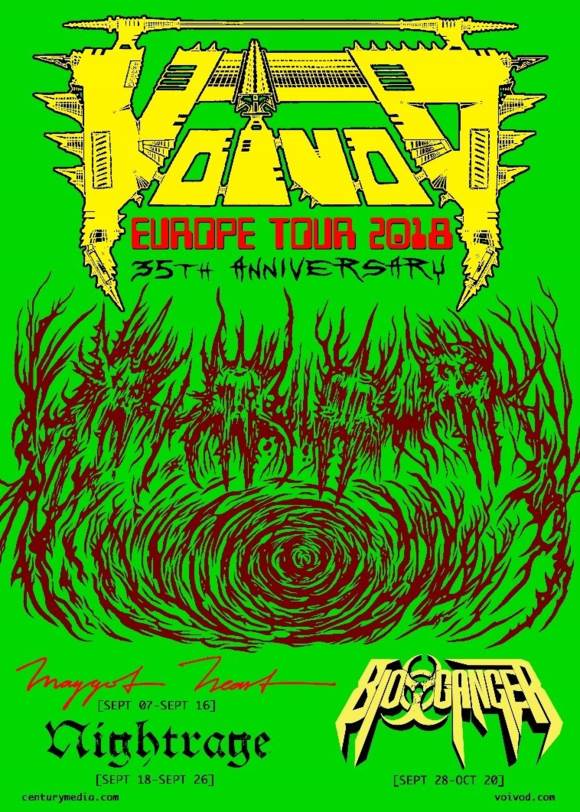