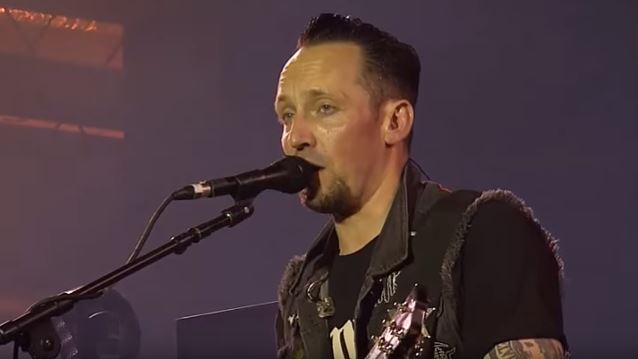 VOLBEAT Frontman: 'We Found Our Signature Sound And Style On The First Record'

Sofie of Studio Brussel conducted an interview with guitarist/vocalist Michael Poulsen of Danish/American rock 'n' rollers VOLBEAT when the band played at the Graspop Metal Meeting in Dessel, Belgium on June 17. You can now watch the chat below.

Asked how VOLBEAT deals with the fact that fans sometimes worry that each new album from the band is going to be softer than the previous one, Michael said: "We don't. [Laughs] We do what we do, and we love what we're doing. And we're just progressing as a band. Sometimes people think the next record is too heavy or too soft. It depends on which ears are listening to it. We don't care too much about it. We are VOLBEAT and we found our signature sound and style on the first record. And there's a lot of new songs that could be on the first record, but then again, we're also progressing as a band, so maybe some of the songs are a little bit more soft, but there will always be metal influences and… We don't care too much about it. We just like to write songs and be on the road. We would never like to be on the road if we didn't care about what we were doing. So who knows? Maybe the next record will be an extreme metal album. It really depends on where you are when you sit down and write. So we don't think too much about it."

VOLBEAT spent most of the summer in Europe, returning in August for SEETHER's Rise Above festival in Maine on August 6, the Heavy Montreal event on August 7, and an opening slot for METALLICA at the U.S. Bank Stadium in Minneapolis on August 20.