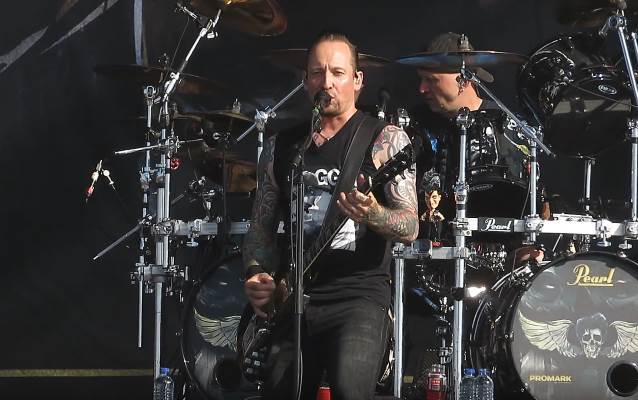 Danish/American rock 'n' rollers VOLBEAT paid tribute to Vinnie Paul Abbott during their concert Saturday night (June 23) at the Graspop Metal Meeting in Dessel, Belgium. Giant screens on either side of the stage projected the former PANTERA drummer's image while VOLBEAT performed the song "Goodbye Forever".

On Friday, VOLBEAT frontman Michael Poulsen issued a statement via Facebook mourning Vinnie Paul's death. He wrote: Today we sadly lost one of the great ones and a true sweetheart. Dear Vinnie, you were such a lovable guy and a friend with a big heart. Thanks for all the great moments together. Your company was always full of smiles. You will be missed by many. Love you, my friend."

In a 2014 interview with Legendary Rock Interviews, Vinnie Paul stated about VOLBEAT: "VOLBEAT took [HELLYEAH] out [in 2012] and that was probably one of my favorite tours I've ever been a part of. They treated us like gold and they were just an awesome band. Michael Poulsen is one of the most unique singers out there."

Vinnie Paul reportedly died in his sleep at his home in Las Vegas on Friday, June 22. He was 54 years old. The drummer's body has been turned over to the medical examiner to determine a cause of death, and after that, he will be flown back to his home state of Texas to be buried between his mother and brother.

Another moving tribute to mr. Vinnie Paul by @VOLBEAT on stage with the song "Goodbye Forever" at @GraspopMetal#GMM18#RIPVinniePaulpic.twitter.com/l2SziZ0eNS

We miss you and we love you. Rest easy Vinnie Paul.

Today we sadly lost one of the great ones and a true sweetheart. Dear Vinnie, you were such a lovable guy and a friend...