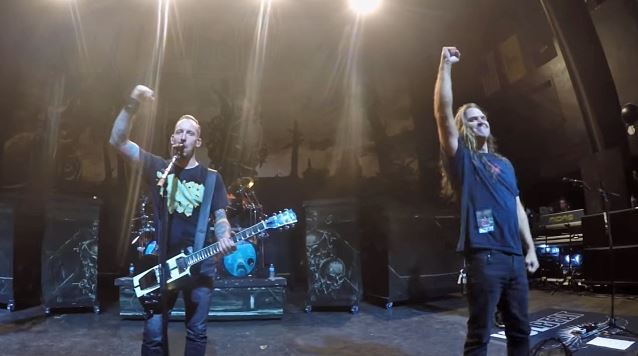 JUNGLE ROT frontman Dave Matrise joined VOLBEAT on stage on September 13 at Riviera Theatre in Chicago, Illinois to perform the VOLBEAT song "Evelyn". Official video footage of his appearance can be seen below.

In a 2011 interview with Straight.com, VOLBEAT vocalist/guitarist Michael Poulsen spoke about NAPALM DEATH singer Mark "Barney" Greenway's appearance on the studio version of "Evelyn", which is included on VOLBEAT's fourth album, "Beyond Hell/Above Heaven".

"Writing a song like 'Evelyn' was my way of showing people that it was not only the '50s elements we were inspired by, but we were actually growing up with a lot of great metal bands," Michael said. "And NAPALM DEATH was one of the first extreme metal bands I was listening to — I was listening to them when I bought my first guitar. So being able to have a singer like Barney from NAPALM DEATH on my record was a real accomplishment. It's great to see that it's actually possible for dreams to come true, in a way."

Poulsen, who played extreme metal with his first band, DOMINUS, back in the early 90s, recently said that he wouldn't rule out a return to death metal in future. He said: "It could happen. It's all about timing and having the right time to do it.

"We're very busy in VOLBEAT, touring around the world. It takes a lot of my energy and time to write for VOLBEAT and go on the road. But I have some good friends in the death metal community and we're talking about doing something together."