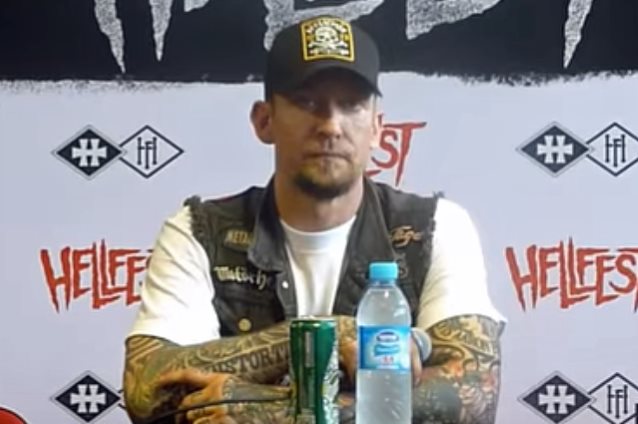 VOLBEAT's MICHAEL POULSEN On MUHAMMAD ALI: 'He Changed The World For A Lot Of People'

Danish/American rock 'n' rollers VOLBEAT took part in a press conference on June 17 at Hellfest in Clisson, France. You can now watch the question-and-answer session below.

Asked for his thoughts on the recent passing of boxing legend Muhammad Ali, VOLBEAT guitarist/vocalist Michael Poulsen — a self-proclaimed "boxing fanatic," whose late father, Jørn Poulsen, was a fighter — said: "Of course, it's very sad. We all thought he was legendary, and he changed the world for a lot of people. [I had] a lot of respect for him as a fighter, but [I had] more respect for him as a human being. So it is a huge loss for the world. He did a lot of good stuff for his people. There will be a song today [during our Hellfest set] that we dedicate to Muhammad Ali."

VOLBEAT will spend most of the summer in Europe, returning in August for SEETHER's Rise Above festival in Maine on August 6, the Heavy Montreal event on August 7, and an opening slot for METALLICA at the U.S. Bank Stadium in Minneapolis on August 8.