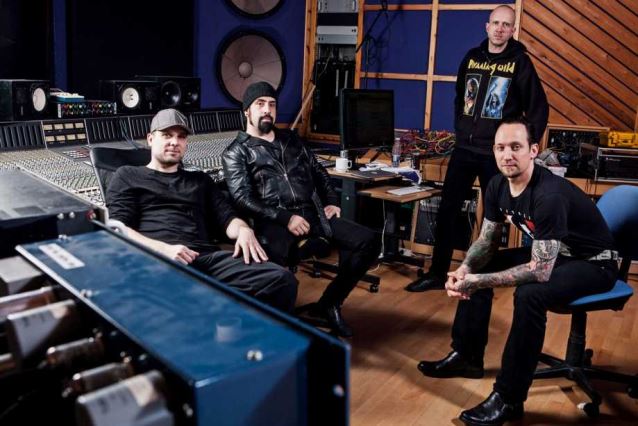 "Anytime you see a band (in Lubbock, Texas no less) who can play Johnny Cash's 'Ring Of Fire' and their own 'Hangman's Body Count' in the same set is worth managing," said Peter Mensch. "We are looking forward to plunging into wildly imaginative world of VOLBEAT."

"We are truly excited to join forces with Q Prime as our management team for the Americas. We're honored to be amongst such great bands as MUSE and METALLICA and to be able to work with such a great organization," said VOLBEAT's Michael Poulsen. "We can't wait to be back on North American soil to see our American and Canadian fans in April."

"Outlaw Gentlemen & Shady Ladies" has sold more than 300,000 copies in the U.S., alongside hundreds of thousands of digital singles. The title has been certified platinum in their home country of Denmark, alongside Germany and Austria, with gold sales in Finland and Sweden. The album has also been certified gold in Canada. This past year, the Danish quartet received their first Grammy nomination in the "Best Metal Performance" category for "Room 24" (VOLBEAT featuring King Diamond),and won Germany's Echo award for "Best International Alternative Act". Recently, "A Warrior's Call" from "Beyond Heaven / Above Hell" was certified gold in the U.S. for sales of 500,000 units by the RIAA.

VOLBEAT recently announced a spring 2015 tour with ANTHRAX serving as direct support and CROBOT opening the show. Their return to North America in 2015 will feature multiple Canadian dates, alongside appearances coast to coast in the U.S., and will kick off on April 24 in Denver, Colorado.