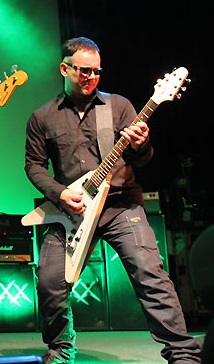 Shermann most recently shared the stage with METALLICA at one of four intimate shows which took place at the Fillmore in San Francisco as part of the week-long celebration of METALLICA's 30th anniversary as a band for fan club members only.

"It's a true honor getting to work with Hank, whose guitar work has inspired all three bandmembers long before VOLBEAT was formed," says VOLBEAT frontman Michael Poulsen. "I'm very thankful that Hank has the time to join us on Gigantour in his busy schedule."

The multi-artist Gigantour bill — with metal heavyweights MOTÖRHEAD, VOLBEAT and LACUNA COIL all personally picked by Dave Mustaine of headliners MEGADETH — will kick off on January 26 in Camden, New Jersey.

Gigantour was founded by Mustaine in 2005 and was last in North America in May 2008.

VOLBEAT recently parted ways with guitarist Thomas Bredahl, who had been a member of the band since 2006.

VOLBEAT has just released "Live From Beyond Hell/Above Heaven" via Vertigo/Universal on double DVD, Blu-ray, limited double DVD + audio CD, CD, digital download and VOD. The set includes footage from VOLBEAT's sold-out show in front of 10,000 fervent fans at the Forum in Copenhagen, to the House of Blues in Anaheim, California and the Rock Am Ring show in Germany. It's VOLBEAT conquering performance territory Stateside and across Europe, showing fans that the band is just as comfortable, charged and throttled in front of an audience as intimate as 1,100 or as vast as 80,000.