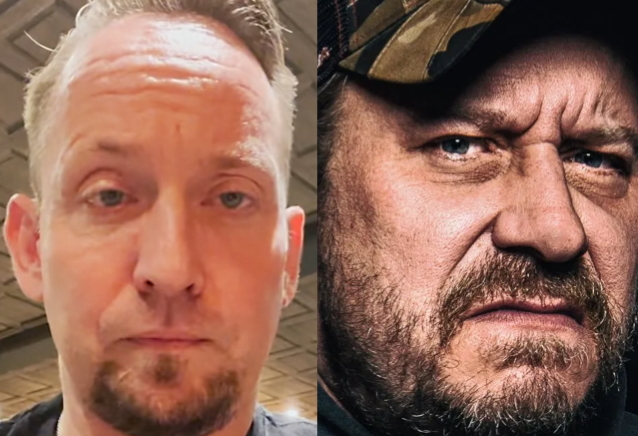 VOLBEAT's Michael Poulsen has confirmed that the band's new song "Becoming" is a "tribute" to the legendary Swedish death metal band ENTOMBED, whose lead singer Lars-Göran "LG" Petrov died eight months ago after a battle with bile duct cancer. He was 49 years old.

In a new video explaining the inspiration for "Becoming", Poulsen said (as transcribed by BLABBERMOUTH.NET): "[The song] is, as you probably noticed, a tribute to the mighty ENTOMBED and our good friend L.G. Petrov who sadly passed away. But, yeah, it's one of those riffs where you can definitely hear the inspiration from the 'Clandestine' album, which [was] L.G.'s favorite ENTOMBED record, which is quite funny because he doesn't sing on this album.

"L.G. was a great guy, a great human being, a good friend. And wherever you are out there, friend, dear brother, I hope that you're doing good down there or up there.

"Let's all raise our glasses for Mr. L.G.

"'Becoming' is for you, my dear friend. Cheers!"

"Becoming" is taken from VOLBEAT's eighth studio album, "Servant Of The Mind", which is due on December 3 via Republic Records.

A few years ago, Poulsen, who played extreme metal with his first band, DOMINUS, back in the early '90s, said that he wouldn't rule out a return to death metal in future. "I do have things at home — I can pick up some few death metal riffs here and there," he told Heavy TV. "I've got so many good friends in the death metal scene, and I've been talking to some of them to one day, when the time is right, sit down and write some old-school death metal. When that's going to happen, I don't know. It will happen; it's just timing is everything."

Back in 2011, Poulsen told Soundspike about his pre-VOLBEAT act: "[DOMINUS] was straight metal. On the third record, we were starting to flirt around with making a little bit with some rock 'n' roll stuff. What I wanted to do was keep the door wide open and see what happens. I didn't want to paint myself into a corner. If I wanted a song to start like a country song and let it burst into a metal song, that's what I did. Right now it comes very naturally. That's the most important thing — that you don't sit and try too hard to provoke it out of you. It has to come as a normal flow, and that's actually what happened."