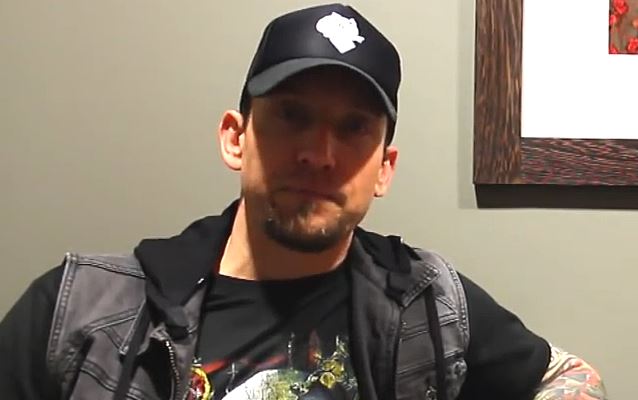 Asked to weigh in on Gene's comments, Poulsen told Terrie Carr of the WDHA-FM 105.5 FM radio station: "If you ask me, rock and roll and heavy metal music are the kind of genres that will always survive, because it's played by human beings.

"I believe Gene is just… he just sees the difference now.

"I don't really, honestly believe that he thinks rock and roll is dead. He's still doing really, really good, so I can't see how it can be dead.

"[Fans of rock music are like] one huge family. We share one thing and we take good care of it.

"You also have to understand that when Gene was starting his whole rock and roll thing, it was so much different. So I just guess sometimes you can wake up and ask yourself, 'So this is how it works today?'

"I totally get the frustration.

"I don't take his comment that serious. I don't think he really means it. He's just seeing a huge change with technology and the way people are recording and releasing albums, and stuff like that. Some of it I'm not a fan of either. I still miss the tape-trading days, and stuff like that. Jumping on the bike to get to the record store and find that vinyl that you wanna have, I miss that too and the simplicity of it all.

"But it is what it is today, and honestly, some of it I'm not a fan of. And the other way around, [social media is] a quick way of promoting yourself. So it is what it is."

VOLBEAT's latest effort, 2013's "Outlaw Gentlemen & Shady Ladies", has sold 250,000 copies in the United States, according to Nielsen SoundScan. The set features the No. 1 singles "The Hangman's Body Count" and "Lola Montez", as well as the Top 5 track "Dead But Rising" and new single "Doc Holliday".