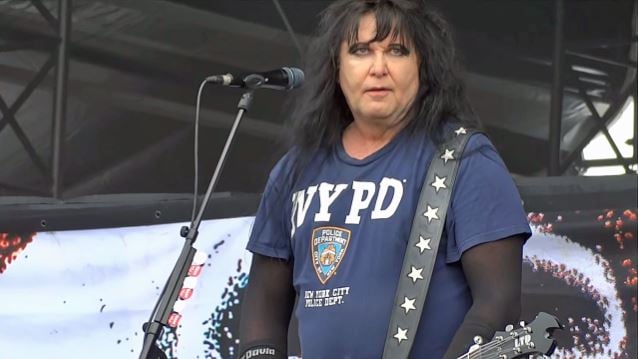 W.A.S.P.'s fifteenth studio album, titled "Golgotha", will be released on October 2 via Austria's Napalm Records. The cover artwork for the CD can be seen below.

Commented W.A.S.P. mainman Blackie Lawless: "There are times in any band's career that somehow all things mesh together. Their experiences, influences, and personal timing bring them into a common space. This has happened with this record. Four years in the making has provided direction, but even greater reflection."

At the 2014 edition of the Sweden Rock Festival in Sölvesborg, Sweden, Lawless stated about the lyrical inspiration for the upcoming CD: "'Golgotha' is Hebrew for place of the skull, and it's the hill where Christ was crucified. And it's interesting, when you see a lot of bands going around using Satanic images or images of death and things like that, and I'm thinking, all they need to do is look at the source, 'cause it's right there. I mean, if you want death, there's enough to go around there."

Regarding the musical direction of W.A.S.P.'s new material, Lawless said: "It sounds probably more similar to the last two that we've done [2007's 'Dominator' and 2009's 'Babylon']. And we've been working on this thing for four years now."

He continued: "I don't know if you guys heard, I had a little hiccup [in 2013], and that delayed recording for almost a year. I broke my leg. And that, too, was an interesting trip.

"But there's one thing that I learned when I was doing [1992's] 'The Crimson Idol': if you make a record over too long of a period of time, you have to be very, very careful, because the record you start out making is not the record you end up finishing, because you've changed so much as a person over a three- or four-year period, you've gotta be very, very careful to hold on to that vision. But from what I'm hearing so far, it has definite overtones of the last two records."

Drummer Mike Dupke recently left W.A.S.P. after a nine-year stint with the band. A replacement drummer has not yet been announced.