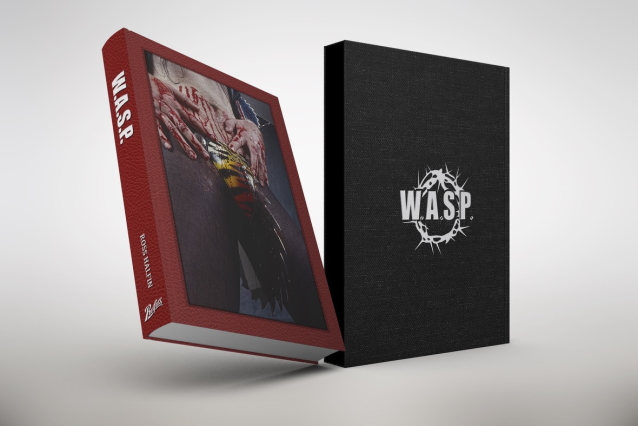 Having sold over 12 million albums worldwide, W.A.S.P. was one of the pre-eminent major label American heavy metal bands of the 1980s. Formed in 1982 in Los Angeles California, the band built a large and dedicated global following with its eponymous debut album and subsequent releases, including "The Last Command", "Inside The Electric Circus", "The Headless Children" and more.

Managed by legendary IRON MAIDEN manager Rod Smallwood, the band played some of the seminal concerts of the era, including multiple visits to the renowned Monsters Of Rock festival in England in 1987 and 1992 and also toured the globe with other seminal acts such as KISS, IRON MAIDEN, BLACK SABBATH, METALLICA, DOKKEN and many more.

"W.A.S.P. By Ross Halfin" starts at the very beginning in Hollywood, California where photographer Ross Halfin shot the band for the first time at The Troubadour — the famous club on Santa Monica Blvd which launched the careers of many artists, including MÖTLEY CRÜE, GUNS N' ROSES and Elton John, to name just a few. Ross would work with the band right the way through this period from the small clubs to headlining venues such as Long Beach Arena and Hammersmith Odeon.

This book offers a unique insight into the classic period of W.A.S.P. with an array of Ross's fantastic dramatic live photos coupled with candid offstage reportage capturing the humor and spirit of the characters behind the instruments as well as studio sessions that would become iconic and defining for the band.

In addition to the photography, former W.A.S.P. guitarist and co-songwriter Chris Holmes provides anecdotes and memories throughout the book, sharing insights and stories for the very first time that provide a truly exceptional commentary that is an absolute must for all fans of the band. There are also forewords from the Smallwood and Halfin sharing their own perspectives and experiences with one of America's most notorious and influential metal bands of that era.

This 300-page plus coffee-table book features a 3D lenticular cover, is bound in red recycled leather and presented in a protective slipcase. Only 300 numbered copies are available worldwide and each copy is personally signed by Holmes. The book costs £275 plus shipping worldwide.

Pre-orders start on Friday, September 2 at 3 p.m. U.K. time and the book will ship at the end of November 2022. A 10% pre-order discount can be claimed with the code WASP2022 at the checkout.

You can watch the video trailer below.

During an appearance on a recent episode of the "Rock Talk With Jacqui Neal" podcast, W.A.S.P. frontman Blackie Lawless reflected on his band's 40-year career. He said: "I'm one of those people that doesn't measure time well. I hear a lot of people say, 'It's been 10 years since tada tada da,' and they really feel the effect of that 10 years. To me, for some reason — I don't think it's denial, 'cause I've been like this my whole life — to me, 10 years doesn't feel like what I hear other people talk about 10 years. So whether it's a decade, two, three decades, a tour, whatever, to me I have the memories, of course…

"First of all, I don't feel like I'm getting any older, so I'm kind of in an adolescent time warp, if you like, and I just see things through that arrested development that the world has given me the opportunity to stay in," the 65-year-old musician, whose real name is Steven Duren, continued. "To say, 'Oh, wow. It's been that length of time,' I think to myself, 'Well, yeah, that is true.' But I don't see it as catastrophic or that it's some giant punctuation mark coming at the end of something.

"I don't ever see myself retiring," Blackie added. "What's the point in that? I'm one of those people that if I could have put myself in a Xerox machine and spit out two or three copies of myself, I would have been happy, 'cause I had a bunch of stuff I wanted to do. I have a lot of interests that I'm passionate about, but there just wasn't enough of me to go around. But you do the best you can with what you've got."