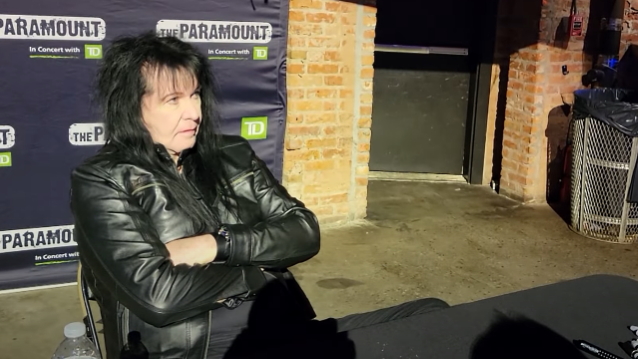 W.A.S.P.'s BLACKIE LAWLESS Looks Back On PMRC: 'It Changed My Life'

During a "VIP Experience" question-and-answer session before W.A.S.P.'s November 18 concert at The Paramount Theater in Huntington, New York, frontman Blackie Lawless was asked how he was affected by his experience with the PMRC (Parents' Music Resource Center) more than three and a half decades ago. He responded (as filmed by Kenny Kessel of The Metal Voice): "It changed my life, if that's what you mean. It made me more of a recluse. Yeah, a couple of thousand death threats and bomb scares and getting shot at a couple of times usually has a tendency to alter your outlook on life a little. But also, we were exposed to extreme fame very early, and fame is kind of like this — if this table is a smorgasbord, it's like an evil genie stands down at the end of the smorgasbord and [says], 'You can take anything you want, but if you take one thing, you take it all. You do not get to pick and choose. So all the good stuff that you like in the smorgasbord, that's wonderful, but you've gotta take the bad stuff too.' So it ends up being a life-altering experience, one I don't think you can ever really go back from — at least I haven't been able to."

Back in the mid-'80s, the PMRC published a list called "The Filthy Fifteen" which consisted of the top fifteen songs they wanted banned due to objectionable lyrics suggesting violence, sex, drugs, alcohol or the occult. They petitioned for lyrics to be printed on the album jackets and no one was safe — heavy metal acts were right there alongside the pop stars. AC/DC, Madonna, MÖTLEY CRÜE, JUDAS PRIEST, Prince, W.A.S.P., MERCYFUL FATE, Vanity, DEF LEPPARD, Cyndi Lauper and TWISTED SISTER all made "The Filthy Fifteen" list. In November 1985, the RIAA (Recording Industry Association Of America) agreed to put "Parental Advisory: Explicit Lyrics" labels on selected releases at their own discretion.

In a 2004 interview with the Las Vegas Mercury, Lawless spoke about having his music slammed by the PMRC, saying: "As the story goes, [PMRC founding member] Tipper [Gore] was walking down the hall in her house and her 12-year-old son had [W.A.S.P.'s] 'Fuck Like A Beast' playing on his stereo, and she lost her mind," Lawless said. "I don't know if that's true, but that's the story I've been told.

"You wanna talk about sensationalism?" Blackie continued. "This was an organization that was seeking a platform that would help serve its own political interests. They didn't give a damn about censorship. I've spent the better part of my career trying to get people to understand that. This really is not what you think it is. They come to you like the wolf in sheep's clothing and then use you to create a frenzy — not unlike what McCarthy did with the communists and Bob Dole did with rap. This is nothing new.

"You don't have to be Nostradamus to see what's going on with young people these days," Lawless continued. "Parents just don't get involved with their kids as much as they used to. Are you going to tell me that these parents at Columbine didn't know that anything was going on with their kids? Hey, my mother knew what I was doing 24 hours a day, seven days a week. But parents now, they don't want to take any responsibility for their children. They bring something into this world, and then when something goes wrong, they want to blame everybody else for it."

Last month, W.A.S.P. embark on its first U.S. tour in a decade. The trek coincides with the band's 40th anniversary and includes support from ARMORED SAINT and MICHAEL SCHENKER on select shows.

Lawless has led W.A.S.P. as its lead vocalist and primary songwriter since its beginning. He is joined in the band's current lineup by bassist Mike Duda and guitarist Doug Blair, whose tenures in the band span 26 and 18 years respectively, along with drummer extraordinaire Aquiles Priester.