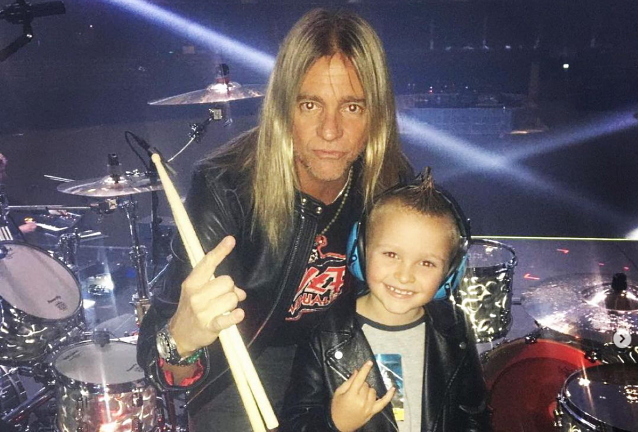 Eight-year-old Caleb Hayes joined EVANESCENCE on stage during the band's soundcheck last Thursday (November 17) at the OVO Hydro in Glasgow, United Kingdom to play the song "Take Cover". Video of the performance can be seen below.

A couple of days later, EVANESCENCE drummer Will Hunt shared several Instagram photos of Caleb with members of the band, and he included the following message: "What an incredible experience meeting this amazing young man and his family (he just turned 8!!).

"@calebhdrummer4 came with his parents and his awesome sister Isabella to our show in Glasgow at The Hydro. I've seen Caleb do a drum cover of our song Take Cover on Instagram. So, when he and the fam came for soundcheck we asked if he would like to play the song with us- and with absolutely ZERO fear or trepidation he smiled real big, shook his head, and said YES!! He absolutely KILLED it, and with his smile and playing proceeded to put smiles on everyone's faces in the entire arena. His smile and joy when he plays are infectious and reminds me why I started playing in the first place.

"Thank you Caleb!! Keep rippin' and I look forward to seeing you again soon!!!"

In a message accompanying the YouTube video of Caleb's performance, his parents wrote: "Caleb had his mind absolutely BLOWN when he was invited to play Take Cover with EVANESCENCE in soundcheck! He wasn't expecting it & even though Will's Monster kit is huge in comparison to Caleb (4ft tall) he was still determined to crush it & give it his all!

"Thank you Will for making this happen. Precious memories with an absolutely Awesome band".

Counting Hunt, Joey Jordison, Dave Grohl and Taylor Hawkins as "early" influences, Caleb's love for music, and heavy metal in particular, likely came from watching his parents play in a local cover band, where they recreated hits from AC/DC, LED ZEPPELIN and METALLICA around their native Cumbria, England. He told SPIN: "I used to watch my Mum and Dad at their band practice when I was little, I wanted to jump on the drum kit and play, they used to let me watch them and then play at the end. They've always let me make lots of noise with my drums in the house, even at 6:00 in the morning." He added that playing drums gives him "good vibes. I feel so happy and excited, my heart goes boom-boom-boom sometimes," he said.

This past March, when he was just seven, Caleb was a guest on "The Ellen DeGeneres Show" where he performed a cover of SLIPKNOT's "Sulfur".

"I've been drumming since I was two years old," he told host Ellen DeGeneres. "My dad [played drums]. He taught me a little bit but not everything."

Regarding his passion for heavy metal music, he said: "I listened to some heavy metal music and I just got into it all. I went, like, 'Yeah, I'm gonna listen to this all the time.'" He added that his "number one" favorite band is SLIPKNOT.