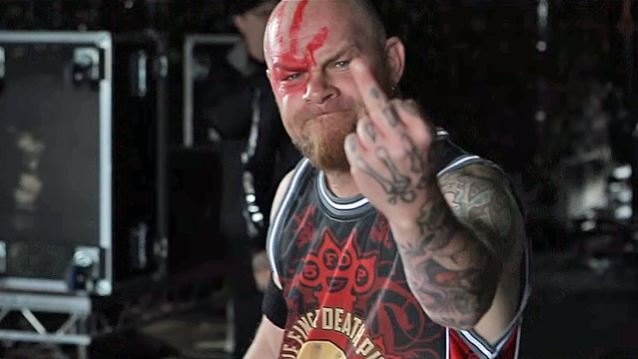 Metal Hammer magazine has uploaded video footage of FIVE FINGER DEATH PUNCH as they prepared to go on stage at last month's Reading festival in Reading, England. Check out the clip below.

FIVE FINGER DEATH PUNCH guitarist Zoltan Bathory stated about performing: "The reason you get into this is because of the music and because of that moment, that hour [on stage]. It's either about writing music or performing music.

"The world is full of shit. The music industry is… You have to deal with all kinds of things in your daily life and keep this whole running, and that's the moment when I walk on stage and everything is all right, because I don't think of anything else. It's, like, ''Okay, this is why we're here. This is why we started it. This is what it is about.'"

FIVE FINGER DEATH PUNCH's latest album, "Got Your Six", was officially certified gold on August 8 by the RIAA (Recording Industry Association of America) for sales in excess of 500,000 copies.