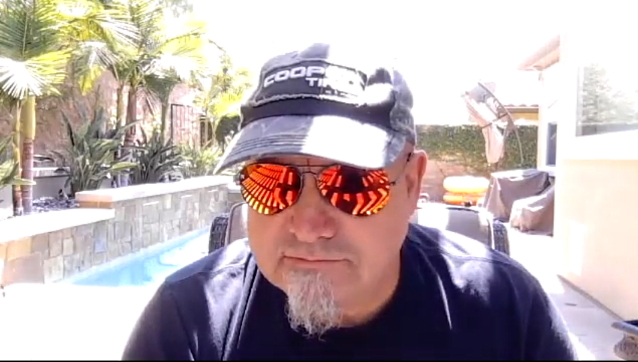 WARRANT guitarist Joey Allen spoke to "The Chuck Shute Podcast"about playing with Lars Ulrich in a pre-METALLICA band in Southern California in 1980. "It was actually a five-piece," Joey recalled (as transcribed by BLABBERMOUTH.NET). "It was right when he moved from Denmark to Newport Beach. He lived in a tennis community called Park Newport. He put an ad out in [a local paper called] the Recycler, and we answered the ad. He had a guitar player — a guy named Lloyd Grant, who actually played on, I think, 'Hit The Lights' on that 'Metal Massacre' [compilation] record. So it was me on rhythm guitar, Lloyd on lead guitar, a friend of mine, Jeff Brooks, on bass, and another friend of mine that I grew up with tried to sing at the time. We were all so young. Lars was too. But he was the one that turned me on to a lot of the New Wave Of British Heavy Metal and some of the bands like TYGERS OF PAN TANG and DIAMOND HEAD — stuff like that. And then when he went back to Denmark for a little stint, at that time I asked Lloyd if he wanted to get another drummer. And he said, 'No. I'm gonna stick with Lars.' And I said, 'Okay.' And that was it. And then look at Lars now. He's got a bigger pool than I do."

METALLICA was formed when Ulrich placed an ad in the Recycler looking for other musicians to play with. The ad was answered by guitarists James Hetfield and Hugh Tanner of the band LEATHER CHARM.