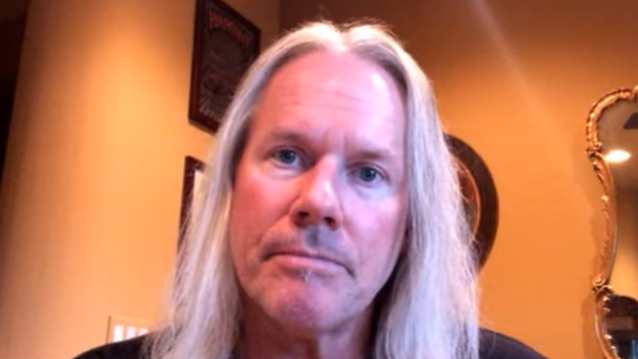 WARRANT's ROBERT MASON: How I Found Out About JANI LANE's Death

Robert Mason has once again said that Jani Lane was "in a very dark place" before his final exit from WARRANT.

Speaking to Waste Some Time With Jason Green about how Jani's last split from WARRANT came about, Mason said (as transcribed by BLABBERMOUTH.NET): "They told Jani he was better off probably staying off the road, because they were having a hard time keeping him sober. They hired a very expensive per-day sober coach that couldn't do it.

"It's a horrible thing," he continued. "He succumbed to all of that… He was in a very, very dark place, and the worst place for him was to be on the road. And my guys were deathly afraid of finding him not making lobby call one day and expired in a hotel on the road, and how that would look and how that would feel for them.

"[After I joined WARRANT] Jani was alive and did Jani Lane solo shows for a little bit. He put a band together with a lot of the usual suspects, guys he would use, and really great players. But he was just not the same guy and not in the same place."

Reflecting on how he found out about Jani's death, Robert said: "I think it was us and the SLAUGHTER guys, we were all having dinner at a steak joint somewhere in the middle of the country doing a gig, and everybody's phone just buzzed — it seemed [like it happened] all at once. It was kind of rare for us — all band and crew; everybody — after flying in, we were all sitting around the table, with appetizers, waiting for entrees to show up, and all of sudden, everybody's phones just blew up. And it was that horrible look. I remember somebody looking and going [opens his eyes wide]. And I know they thought to themselves, 'This is what this is,' and they were dead right. We all picked up the phone, and we were, like, 'Did you just hear…?' 'Yeah, I just got a text from so-and-so.' 'I just missed a phone call from six people.'"

According to Mason, Lani's passing didn't come completely unexpectedly to him and the rest of WARRANT. "Clearly, it's not anything that anybody wanted to happen, but it was less of a surprise, I think," he said. "It wasn't as huge a shock. And that's a terrible thing to admit."