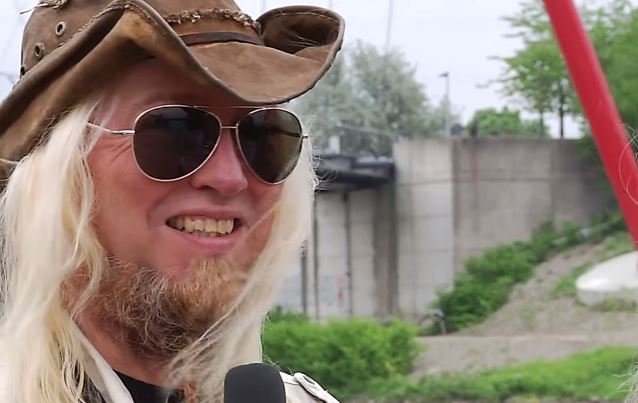 On May 23, Ronny Bittner of Rock Hard magazine conducted an interview with vocalist Warrel Dane and guitarist Lenny Rutledge of the reunited '80s cult metal outfit SANCTUARY at the Rock Hard Festival in Gelsenkirchen, Germany. You can now watch the chat below.

Speaking about SANCTUARY's latest addition, guitarist Nick Cordle (ex-ARCH ENEMY, ARSIS),who was replaced in ARCH ENEMY by Dane's former NEVERMORE bandmate Jeff Loomis, Warrel said: "We wife-swapped with ARCH ENEMY. Jeff's in ARCH ENEMY now, and now Nick's playing with us. We don't know the whole story about that, but whatever… it worked out good for us, and everybody else, I guess, too."

Added Lenny: "Yeah, [Nick is] working out great. He's a great guy, he's a great player. When [SANCTUARY producer] Zeuss recommended Nick, I wasn't even really sure who he was, but I was a real big fan of the recent 'War Eternal' ARCH ENEMY album, and when they told me who it was, I was, like, 'Holy crap! Hell yeah! We'd love to have that guy.' He's just an amazing player. So, once we contacted him and everything, he was into it. So, yeah, everything is going good with him."

Dane also spoke about the possibility of NEVERMORE recording a new studio album, four years after Loomis and drummer Van Williams announced their departure from the band due to personal differences with Dane and bassist Jim Sheppard.

"You never know," Warrel said. "Don't always take everything I say in interviews as the absolute truth. I mean, I would love to do another NEVERMORE record, but I wouldn't do it without Jeff. So… We'll see, you know. He's in ARCH ENEMY now. Nick's in SANCTUARY. And it's kind of weird, and kind of incestuous and bizarre at the same time."

Asked if there is chance SANCTUARY and ARCH ENEMY will one day tour together, Warrel said: "Oh, Jeez… Well, hey, I would be totally open to that. You may have just planted a seed, my friend."

SANCTUARY's comeback album, "The Year The Sun Died", was released in October 2014 via Century Media.