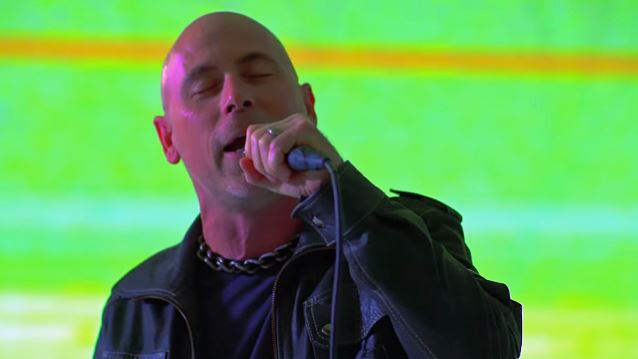 JOHN BUSH Reveals Most Hurtful Thing About His Split With ANTHRAX

Jimmy Kay of Canada's "The Metal Voice" recently conducted an interview with former ANTHRAX and current ARMORED SAINT vocalist John Bush. You can now listen to the chat in the YouTube clip below. A couple of excerpts follow (transcribed by BLABBERMOUTH.NET).

On his decision to leave ARMORED SAINT and join ANTHRAX in 1992:

"I had to think about it. 'Cause… I mean, it sounds cheesy possibly, but there was a real strong loyalty, and there still is to this day, and it's obviously quite prevalent with ARMORED SAINT. And I think the history of the bandmembers goes so far back to when we were children — literally we were eight years old when we became friends, and that friendship pretty much remained. So , without sounding too corny, it was hard to say, 'I'm leaving,' because we had just made 'Symbol Of Salvation', which we thought was a great record, and it was a lot of emotion that went into just making that record, with Dave's [Prichard, ARMORED SAINT guitarist] illness, and then he ended up dying. I didn't probably like the idea that I was leaving the band and, kind of, abandoning the band, but I had to. The results were fairly similar to what we had accomplished before, so it was just time — it was time for me to move on. And even though I was, kind of, having possible second thoughts, I spoke to a couple of friends, and they were going, 'Dude, don't be stupid.' And I said, 'Yeah, I guess you're right.' I think it was important for me to make sure that in ANTHRAX I was part of the whole songwriting process. I was always a lyric writer in ARMORED SAINT, and I didn't wanna go and just kind of be told what to do. I had heard that, kind of, that's how [ANTHRAX] worked with Joey [Belladonna]. Nothing disrespectful at all, but he was kind of given lyrics and [told], 'This is what you're doing, and this is how you're singing.' And I didn't wanna do that. I wanted to be part of the process of creating; it was important to me. And the first thing we did is we tried to write, and we wrote 'Only' in about an hour, and I think that was pretty obvious that it was a good working relationship."

On whether he ever feels shortchanged by the fact that ANTHRAX didn't have as much commercial success with him on vocals as it could have had:

"I don't feel shortchanged about anything — ARMORED SAINT, ANTHRAX… nothing. 'Cause I don't wanna live like that. It's not good for me to live like that. I certainly… I'm not laying in bed at night, going, 'God, I should be more popular.' I do make the joke sometimes, like when I have a diehard fan come up to me, and they'll bring me thirty records that I made, and I'd sign them and I'd laugh, and I would say, 'You would think I'd have more money than I do, with all those records, 'cause there's so many.' But that's just a joke that I kind of say to myself…. You know, what hurt most is that… The relationship I had with those guys — and have — is… Obviously, we were very close. The personal relationships I had with every individual — Scott [Ian, guitar], Frankie [Bello, bass] and Charlie [Benante, drums] — was all kind of different, and yet I was pretty close to all of them in my own way. I think that it could have probably been handled a little bit better. We had this manager at the time, who… He was just not a good person in the sense of being there for us — and I mean us, not just them, but us. He created this kind of wedge, and it shouldn't have had come to that. Because if those guys would have came to me and said, 'You know, we're considering doing a reunion tour [with Joey]. We think it's the right time. I'm sorry.' I would have been, like, 'I understand.' I probably would have just said that: 'I understand.' But the rumors were already circulating, and we were still touring. We were in South America and people were asking questions about it, because they had heard about it, and then those guys were, like, trying to deny it as we were doing interviews together. And I'm going, 'This is…' And I knew. So I was going, 'This is kind of lame.' 'Cause it would have been better if we were, like, 'We're finishing this tour, and then they're gonna do that.' And we would have just been much more straight up about it. But does that bother me at this point? It's water under the bridge now. It doesn't matter. Me and Scott, we speak a lot. I haven't talked to Charlie and Frankie, and it's kind of sad. It got a little weirder later, and there were some people's feelings that were hurt about decisions that were made. But, you know, we went through a long period of time… I was in ANTHRAX for almost thirteen years, and we made a lot of music together. So, again, I don't care. It doesn't matter anymore; it really doesn't. As a matter of fact, I'd probably entertain [the idea of] ARMORED SAINT opening for ANTHRAX some day. I do love the music I made in ANTHRAX, and I actually would prefer them to play a couple of songs [from my era in their current set]. But I understand why they don't, and I understand why Joey probably is not so embracing of that idea, and I get it. And I hold nothing personal about that whatsoever."