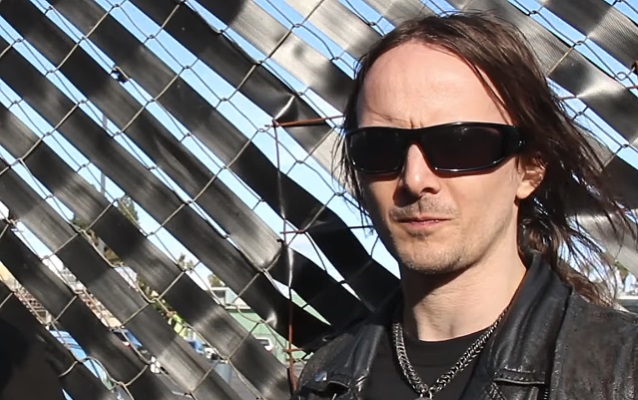 The Jimmy Cabbs 5150 Interview Series conducted an interview with frontman Erik Danielsson of Swedish black metallers WATAIN prior to the band's March 17 concert at The Fonda Theatre in Los Angeles, California. You can watch the entire chat in two parts below. A few excerpts follow (transcribed by BLABBERMOUTH.NET).

On whether the band's new "Trident Wolf Eclipse" album can be seen as a "return to form" after 2013's more experimental "The Wild Hunt":

Erik: "Writing an album is still, after 20 years, still a very abstract thing to me. I think we make a point out of not really knowing what we're doing and whatever comes out at the end, that is heartfelt and that feels genuine, that is the album. Whether or not it sounds like something we've done more in the past or something that is entirely new, that's also, I mean, that's something we very much leave up to chance, although there's no such thing as 'chance,' I believe, with WATAIN. But, it's very much about us being us, I guess. Everything else would be quite uncreative, I think. For me, creativity is about emptying yourself of what is currently relevant within you. That's what 'Trident Wolf Eclipse' is very much [about]."

On whether he thinks about the Antifa, a militant anti-fascist moment, which recently prompted the cancelation of Norwegian black metal outfit TAAKE's planned North American tour after images resurfaced of lead singer Hoest with a swastika painted on his chest:

Erik: "Yeah, I kind of have to, considering the recent events, but what can I say? I think it has to do with this: I think it has to do with the fact that black metal is getting more and more attention from people who have no relation whatsoever to the 40-year-old history of this culture, this movement and these people are going to find it very complicated, I think, to moralize over an artform where rule number one has always been that there are no morals to take into consideration. You're looking at a very complicated discussion to have if you're going to start, like I said, moralizing over this, so, I think that's exactly what's going on. It's an extremely complicated discussion. People who are very concerned with, for example, politics and so on, they think that they're finding things that are antagonist to their worldview. I'm sure they will. I mean, in WATAIN, there are no politics to be considered, but somehow, people always find bits and pieces here and there that they get upset by and so on. In a way, it's all good. If you don't face opposition as a black metal band from people who are very concerned with upholding western moral ethical standards, then I think you are doing something wrong. There has to be opposition like that. What I do not like — I take the fight any day if it had to do with opinions and viewpoints that we actually stood for, but I'm very bored about talking about politics, for example or when people just haven't got the idea of what this is all about. There are no politics in WATAIN whatsoever. If people see that, they're looking at it from the wrong angle. It becomes very tiresome. I can defend myself anytime if people have a problem with us being a satanic band, any day, I'll take that discussion, sure. But, if they're calling us anything else than that, then they're wrong. They're on the wrong path."

On whether this is the perfect time for WATAIN's brand of black metal to be released in the so-called "age of morality":

Erik: "Yeah, it's a good thing. I mean, records like this will keep on coming out, no matter what happens. No matter if we got the new Tipper Gore in the Antifa. That's exactly what it is. People are scared of diabolical things. These things, the devil always wins. It's an old lesson learned. If people want to try to fight him, be my guest. It's a battle lost before it's even begun for these people."

On how WATAIN has been able to maintain its integrity throughout their career:

Erik: "That's a very difficult question for me to answer. We just keep on doing what we're doing. After 20 years, you probably, hopefully most people after such a long time of doing one thing and one thing only, they probably figured out a bit about who they are and what they want to do. I certainly have and we certainly have with WATAIN. Maintaining that, is the least of our problems, I think. We have something that we love. We have something that we feel great respect for, great humbleness toward, a lot of gratitude. And we consider the thing we do sacred. I don't need anything more than that."