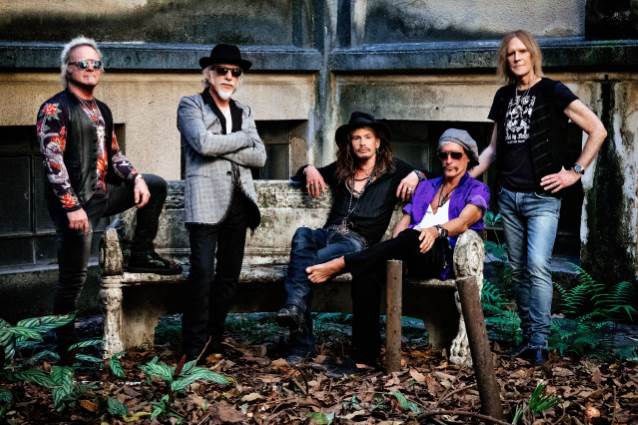 AEROSMITH performed the songs "Mama Kin" and "Big Ten Inch Record" on the Thursday, August 16 episode of "The Tonight Show Starring Jimmy Fallon". The legendary rockers' appearance on the program came one day after they unveiled the first details of their upcoming Las Vegas residency on the "Today" show.

"I feel like we've been out of the wind for a while and it seems like it would be a really cool thing to bring some of the history back, so the production is gonna look like that," guitarist Joe Perry said. "We want to bring a show we can't do when we're on the road on a regular tour. A show that still has AEROSMITH and all the guts of AEROSMITH."

Drummer Joey Kramer added: "The history behind our almost 50 years of being together. As soon as you walk into the Park Theater in Vegas, you're gonna feel it."

"We're going to keep it raw," he said. "It's going to be beautiful, we're going to rock out and we’re going to use some special effects we haven't used before."

AEROSMITH officially formed in Boston in 1970 and last performed on May 5 at the New Orleans Jazz Fest.