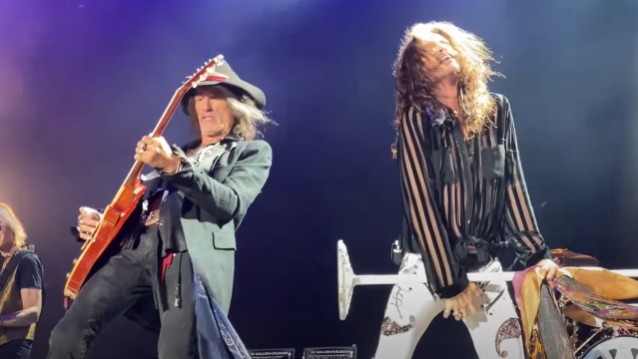 Watch AEROSMITH Play First Concert In Two And A Half Years

AEROSMITH played its first concert in more than two and a half years last night (Sunday, September 4) in Bangor, Maine.

Prior to the show at Maine Savings Amphitheater, the band's last live performance took place in February 2020 in Las Vegas as part of AEROSMITH's "Deuces Are Wild" residency.

The setlist for last night's concert was as follows:

Four months ago, AEROSMITH announced that singer Steven Tyler had entered a treatment program following a recent relapse, prompting the band to put their Las Vegas residency on a temporary hold.

Tyler had been struggling with drug and alcohol addiction since the mid-1980s. Over the course of the last four decades, he had relapsed several times, including in the early 2000s and 2009.

In June, AEROSMITH drummer Joey Kramer's wife Linda Gail Kramer died at the age of 55. No cause of death has been revealed.

JUST ANNOUNCED: @ExtremeBand will be supporting #Aerosmith on September 4th 2022 at the Maine Savings Amphitheater in Bangor, ME. Tickets are on sale now!!