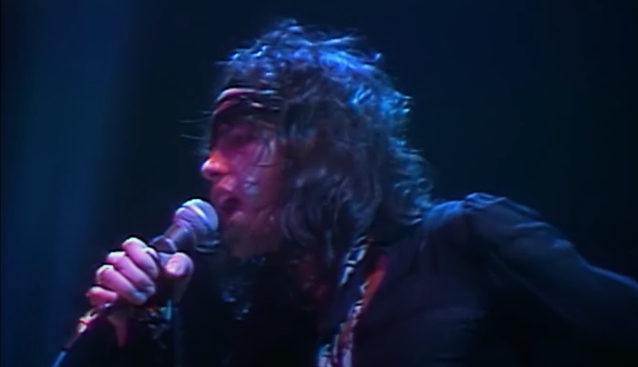 Watch AEROSMITH's 1977 Concert In Houston As Part Of '50 Years Live!: From The Aerosmith Vaults' Series

In continued celebration of their 50th anniversary, the four-time Grammy Award-winning and diamond-certified rock legends AEROSMITH (Steven Tyler, Joe Perry, Tom Hamilton, Brad Whitford and Joey Kramer),have announced the launch of "50 Years Live!: From The Aerosmith Vaults", the band's new "official bootleg" streaming concert series featuring five deep, archival, and unreleased multi-camera live shows from AEROSMITH's vast personal vaults. With the entire production of all five concert films supervised by AEROSMITH, the series kicks off with a live stream of "Live From The Summit, Houston, TX, 1977", a combination of classic live performances from a two-night stand in Houston in 1977 that captures the band in all its raw and powerful rock 'n' roll splendor.

"Live From The Summit, Houston, TX, 1977" premiered on AEROSMITH's official YouTube channel earlier today (Friday, July 29) and will be available, in its entirety as a gift for fans, for one week only. Highlight clips from "Live From The Summit, Houston, TX, 1977" will also be added to AEROSMITH's YouTube channel on July 30 and will include "Back In The Saddle", "Mama Kin" and "Sweet Emotion".

"Live From The Summit, Houston, TX, 1977" is taken directly from the original in-house 2" master analog video cartridge for the best possible quality and features footage filmed over the course of two summer nights at The Summit in Houston, Texas on June 24 and June 25, 1977. The original live feed edit, only intended for the in-house screens, was carefully cleaned, digitized, and remastered in HD, bringing the 45-year-old footage to life. This hour-long, highly charged performance shows why AEROSMITH became one of the hottest bands of the '70s and continues to this day. "Live From The Summit, Houston, TX, 1977" kicks into full gear as the band burst onto The Summit stage, delivering powerful and raw renditions of "Back In The Saddle", "Mama Kin", "Lord Of The Thighs", "Lick And A Promise" and "Sweet Emotion", featuring Tom Hamilton's signature bass line as he lays down that familiar groove as Joe Perry's iconic talk box intro eases the audience in. Other highlights include "Draw The Line", "Walk This Way", a blistering version of "Toys In The Attic" and their 1973 Top 10 power ballad "Dream On".

For "50 Years Live!: From the Aerosmith Vaults", producer Steve Berkowitz, along with longtime AEROSMITH employees Tommy Higgins and John Bionelli, combed through the band's vast Vindaloo Vaults, unearthing a treasure trove of filmed concerts recorded in the original formats of the day, covering the band's history throughout the decades. With the help of director and producer Jennifer LeBeau (Lady Gaga, Tony Bennett, Bob Dylan, Paul Simon),this footage was carefully transferred and converted to digital to help preserve these historic recorded documents. Produced by Steve Berkowitz and Dennis Wolfe, the video and audio restoration was skillfully conducted by Vanderquest UK and Formosa Sound, giving these performances the highest possible visual and sonic quality.

For five consecutive weeks, starting on July 29 with "Live From The Summit, Houston, TX, 1977", AEROSMITH's official web site and YouTube channel will premiere a different concert every week from each decade. With each show, the band's official online store will also feature a new collection of exclusive merchandise capsules celebrating each decade.

As part of the continued celebration around their 50th anniversary, AEROSMITH will return to Las Vegas to bring their critically acclaimed residency, "Aerosmith: Deuces Are Wild" to the Dolby Live at Park MGM. Kicking off September 14 — with shows running through December 11 — the residency is the first live concert experience presented in Dolby Atmos at Dolby Live. Dolby Live is one of the world's most technologically advanced performance venues for enjoying live music in Dolby Atmos.

In addition to their upcoming dates in Las Vegas, AEROSMITH is set to perform at Maine Savings Amphitheater in Bangor, Maine on September 4 before they head to Boston for a show at the historic Fenway Park on September 8.

Filmed in Landover, Maryland on December 17, 1989, AEROSMITH closes out the 1980s in top form with this dynamic performance at Capital Centre. "Live From The Capital Centre" features classic tracks such as "Walk This Way" and "Rats In The Cellar", as well as "Rag Doll", "Dude (Looks Like A Lady)" and "Permanent Vacation".

Highlight clips from this show to be added to AEROSMITH's YouTube channel on August 6 will be "Walk This Way", "Permanent Vacation" and "Dude (Looks Like A Lady)".

Throughout the 1990s, AEROSMITH continued to be an unstoppable force in rock, delivering a high energy set at Coca-Cola Star Amphitheater on July 2, 1993, with all the same swagger and attitude they had from day one. The tightly knit band belts out now classics such as "Eat The Rich", "Janie's Got A Gun", "Livin' On The Edge" and "Cryin'". Older favorites include "Last Child", "Walk This Way" and "Back In The Saddle".

Highlights from this show to be added to AEROSMITH's YouTube channel on August 13 will be "Cryin'", "Janie's Got A Gun" and "Livin' On The Edge".

"Mama Kin" kicks things into high gear as AEROSMITH storm through Michigan on September 7, 2003, at Comerica Park during their "Rocksimus Maximus" tour. Included are classics such as "Same Old Song And Dance" and "Walk This Way", as well as "Jaded", "Love In An Elevator" and the Grammy Award-winning single "Pink". AEROSMITH brings the incredible night to a close in a cloud of confetti and a frenetic version of "Toys In The Attic".

Highlights from this show to be added to AEROSMITH's YouTube channel on August 20 will be "Toys In The Attic", "Same Old Song And Dance" and "Love In An Elevator".

Captured at the Arena Ciudad de Mexico in Mexico City on October 27, 2016, this show was enhanced with the discovery of the original multi-tracks that were added and mixed by AEROSMITH's long-time soundboard engineer John Ship. The band wastes no time getting into their groove as Steven Tyler swaggers through classics such as "Draw The Line" and "Rats In The Cellar", as well as "Crazy" and their hit ballad "I Don't Want To Miss A Thing". Teasing the crowd with a "You See Me Crying" and "Home Tonight" medley, Tyler breaks into a powerfully moving rendition of "Dream On" before bringing the show to an explosive end with "Sweet Emotion".

Highlights from this show to be added to AEROSMITH's YouTube channel on August 27 will be "Crazy", "Dream On" and "I Don't Want To Miss A Thing".

In addition, "Aerosmith - 1971: The Road Starts Hear" (UMe) is now available globally on CD and vinyl LP and can now be streamed. This rare recording from 1971 was recently discovered in AEROSMITH's Vindaloo Vaults and was originally only available as a limited-edition cassette and vinyl release for Record Store Day in 2021. The heavily sought-after RSD release quickly sold out and debuted on the Billboard 200, hitting No. 2 on the Top Hard Rock Albums chart, No. 12 on the Top Rock Albums chart, No. 13 on the Vinyl Albums chart, and No. 19 on the Top Album Sales chart. In addition, the band's official online store now features a new 1971 collection of exclusive merchandise.

Celebrating their 50th anniversary, Rock And Roll Hall Of Fame inductees AEROSMITH have sold more than 150 million albums around the world, produced genre-defining music videos such as "Amazing", "Crazy", "Janie's Got A Gun", "Livin' On The Edge" and "Love In An Elevator", and launched extravagant record-shattering global tours, most recently with their smash hit Las Vegas residency. The band has broken numerous boundaries, including becoming the first rock band with a massive commercially successful hip-hop collaboration with RUN DMC on "Walk This Way" and the first hard rock band to appear during a Super Bowl halftime show with their 2001 performance, and in 1999, AEROSMITH became the first band to have their own themed attraction at Disney World in Florida and later Paris with the launch of the Rock 'N' Roller Coaster Starring Aerosmith.