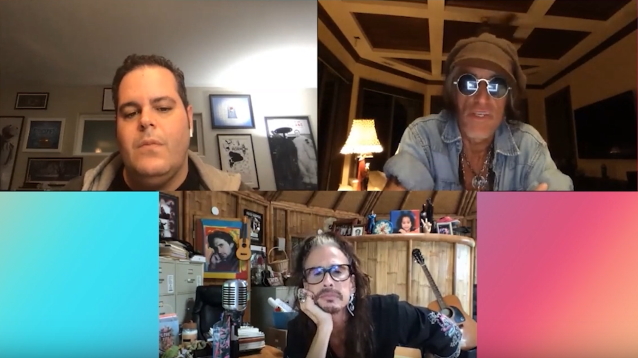 The rockers' appearance began with a comedy bit where Gad pretended that he was calling Perry and Tyler to ask for the phone numbers of Mike Myers and Dana Carvey, who played Wayne and Garth in the film. "You brought us — two world-famous rock stars — on your show to get in touch with two people we casually know?" a mock-outraged Tyler wondered.

Gad, best-known as the voice of Olaf the snowman in "Frozen", has been hosting virtual reunions for classic films across lockdown on his "Reunited Apart" series, previously bringing together the cast of "Ferris Bueller's Day Off" back in June.

"Wayne's World" turned 28 this year. The Penelope Spheeris comedy based on a Myers/Carvey "Saturday Night Live" skit came out in February 1992, following thirty-four days of shooting with a relatively modest $20 million budget. It eventually became the highest-grossing of the many films based on "SNL" skits, with a box office take of more than $183 million worldwide.

AEROSMITH turned down the chance to appear in the first "Wayne's World" movie after Myers had wanted the band to reprise its cameo from a 1990 "Saturday Night Live" sketch. However, the legendary rockers agreed to appear in the 1993 sequel, performing "Dude (Looks Like A Lady)" and "Shut Up And Dance".

Earlier this year, AEROSMITH was forced to postpone some of its "Deuces Are Wild" Las Vegas residency performances in the wake of the coronavirus crisis.

AEROSMITH hasn't released a new studio album since 2012's "Music From Another Dimension!" That effort was released when AEROSMITH's label, Columbia Records, was reportedly going through a leadership change, and it ended up becoming a commercial disappointment.

The lackluster response to "Music From Another Dimension!" later caused two bandmembers — guitarist Joe Perry and drummer Joey Kramer — to question whether there's any point in AEROSMITH making future albums.