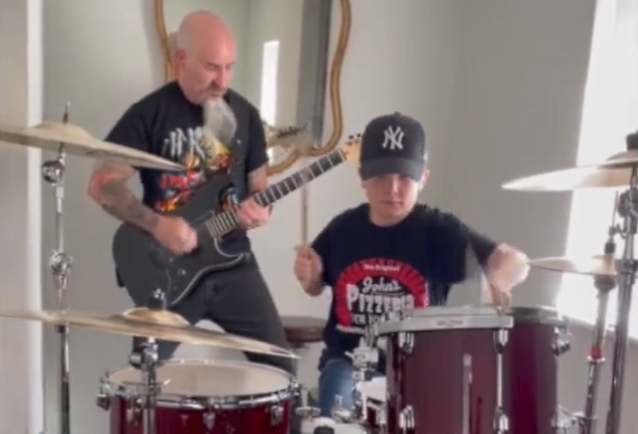 ANTHRAX guitarist Scott Ian was joined by his 10-year-old son Revel Young Ian on drums as they performed renditions of several FOO FIGHTERS songs for an Instagram video which Scott shared on Sunday (April 3). Scott captioned the clip: "Paying tribute to Taylor…we've been jamming our favorite Foo's all week. Healing our hearts with the power of rock. We love you Taylor and Dave and Pat and Chris and Nate and Rami. @foofighters #taylorhawkins #patsmear @davestruestories @shifty71 #natemendel #ramijaffee".

Scott previously shared videos of him and Revel performing the SEPULTURA songs "Roots Bloody Roots" and "Territory", as well as SYSTEM OF A DOWN's "Bounce", KORN's "Here To Stay" and HELMET's "In The Meantime".

Revel is apparently a gifted multi-instrumentalist who joined the FOO FIGHTERS on stage in September 2019 at the Bourbon & Beyond festival in Louisville, Kentucky to perform "Everlong" on guitar when he was just eight years old.