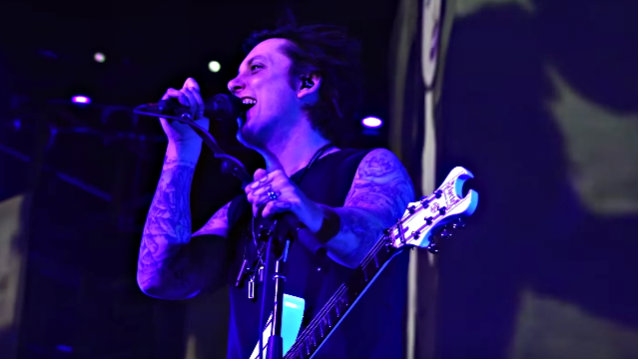 AVENGED SEVENFOLD has posted a video of the group's guitarist, Synyster Gates, getting pranked by bassist Johnny Christ.

Christ played a trick on his bandmate during the band's concert in Stockholm, Sweden, on March 9 by shifting the pitch of the guitarist's vocals in his in-ear monitors to get the kind of high-pitched voice heard in the American movie "Alvin And The Chipmunks", based on the popular group and animated series of the same name which dates back to the 1950s. These voices were originally performed by recording speech spoken (or sung) slowly (typically at half the normal speed) and then accelerating ("pitching up") the playback (typically at double the speed, thereby increasing the pitch by one octave). The same effect can now be created digitally and in real time; it is widely used today in computer music.

"The pranks between me and Syn keep one-upping each other," Christ says in the video. "I had one that I thought was a pretty good one.

"The idea was when he went to go sing in 'A Little Piece Of Heaven', you would hear his voice come through in a chipmunk voice," he continues. "The best part about it was that he would think it was going out into crowd as well. Lo and behold, it would only be for us."

Watch how the prank unfolds in video below.

AVENGED SEVENFOLD has joined METALLICA for the latter's "WorldWired" 2017 North American tour. Produced by Live Nation, the trek kicked off May 10 at M&T Bank Stadium in Baltimore, Maryland with openers VOLBEAT.

AVENGED SEVENFOLD is touring in support of its seventh album, "The Stage", which was released at the end of October with almost no promotion beforehand.