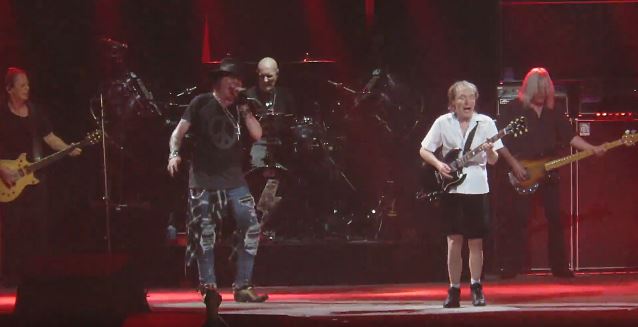 Fan-filmed video footage of AC/DC's August 30 performance at BB&T Center in Sunrise, Florida can be seen below.

The "Live Wire" airing marked the first time since 1982 that AC/DC performed the song, which originally appeared on the band's 1975 album "T.N.T.".

AC/DC guitarist and sole founding member Angus Young recently said that he has not made a decision yet regarding the band's future once the current "Rock Or Bust" tour cycle ends. Following the 2014 retirement of his brother and co-founder Malcolm Young due to dementia, Angus also dealt with the exit of drummer Phil Rudd later that year because of legal problems, and more recently the departure of singer Brian Johnson because of hearing loss and bassist Cliff Williams's decision to retire after the tour ends.

Angus was asked by Rolling Stone whether he had given any thought to his or the band's future, replying, "At this point, I don't know. We were committed to finishing the tour. Who knows what I'll feel after? When you sign on and say, 'I'm gonna do this and that,' it's always good to say at the end of it, 'I've done all I said I would do.'"

Asked if he thought Williams's decision was brought about by Johnson's departure, Angus said, "Cliff made it known before we'd even started touring — this would be his last. Besides myself, Cliff has been there the longest, since 1977. Cliff and Brian are in the same age bracket. They like to go out, hit the pubs. They had the bond."

Williams made his decision to retire public earlier this year, telling Gulfshore Life, "It's been what I've known for the past forty years, but losing Malcolm, the thing with Phil and now with Brian, it's a changed animal. I feel in my gut it's the right thing."