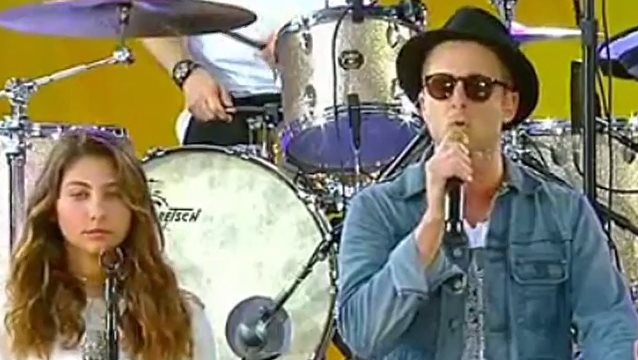 Toni Cornell, the 12-year-old daughter of late SOUNDGARDEN singer Chris Cornell, joined the band ONEREPUBLIC onstage earlier today on ABC's "Good Morning America" to perform the Leonard Cohen song "Hallelujah". The performance, which can be seen at ABCNews.go.com, was a celebration the lives of Cornell and late LINKIN PARK frontman Chester Bennington, both of whom died earlier this year within months of each other.

"It's an honor to perform this for my dad and Chester and to sing for them," Toni Cornell said.

LINKIN PARK was scheduled to perform on "Good Morning America", but ONEREPUBLIC filled in after the former band canceled its tour and concert dates. "This is just an honor to be here," ONEREPUBLIC's Ryan Tedder told "Good Morning America"'s Lara Spencer, adding that he had met Bennington a few times and was friends with Cornell. "I was lucky enough to write and produce with [Chris], and get to know him and his family over the years. He was even in one of our videos."