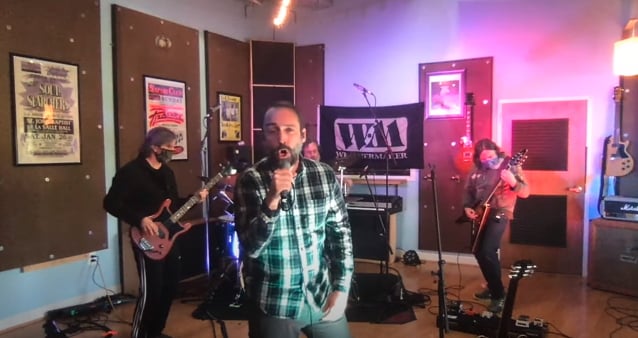 As most of the globe adjusts to the new reality of life under self-quarantine in the midst of the coronavirus pandemic, a number of artists have taken the show online to share some musical joy during these trying times. One of the latest acts to look for a new, temporary way to bond with fans until a return to normal is the Maryland outfit CLUTCH, which livestreamed a three-song set from its rehearsal space earlier today (Tuesday, April 21).

The 16-minute video, consisting of a short introduction and the tracks "50,000 Unstoppable Watts", "El Jefe Speaks" and "Willie Nelson", can be seen below.

After the performance, frontman Neil Fallon addressed the viewing audience, saying: "That's gonna be it for now. We would like to play more. I'm sure you would like to hear songs too. But this is a test. We'll do something more robust in the future. We're eventually gonna get more cameras — trick it out a little bit. This is kind of a learn-by-doing exercise.

"As far as touring goes, we would much rather be onstage smelling you," he added. "That'll come around — not sure when. But a lot of things are in motion."

Fallon recently confirmed to Sonic Perspectives that CLUTCH has commenced the songwriting process for the follow-up to 2018's "Book Of Bad Decisions" album.