On Friday (May 8),German thrash metal veterans DESTRUCTION delivered a treat for fans stuck at home and unable to attend live shows: "Born To Thrash - Live In Germany", the band's first live album with the current lineup, is out now digitally on all streaming and download platforms.

To mark this special occasion, the band has released a live video for "Curse The Gods". Check it out below

DESTRUCTION frontman Schmier states: "'Curse The Gods' is the first of the three video that we will release until the album is out physically in July. There is no better opener for a DESTRUCTION show, and the song and its lyrics are still a true classic! Still one of my faves to play live, even after all those years! We made it possible for the fans to stream the record now, ahead of the physical album release. Production and promotion normally takes several weeks but unusual times need unusual measures! Nothing is like a LIVE show and we all are missing it!"

To include all of their loyal fans in this special release, DESTRUCTION initiated an interactive campaign featuring a map where the band's fans could sign in and mark the location of the first time they saw the band live. The resulting world map will be part of the album and everyone who participated will be mentioned by name on a poster that comes with the strictly limited album's physical version. The album will be available on digipack, black vinyl, red transparent vinyl and picture vinyl on July 17. The pre-order is launching soon so stay tuned and keep an eye on both the band and the label social media platforms for more news.

Schmier comments on the release: "This live album is the most spontaneous thing we ever did, I think! This is the music business — everything usually takes time and the label does not like surprises. But a good friend of ours spontaneously recorded that Party.San show and we had a film team there that weekend 'cause we were shooting a movie. It was a fantastic show and since the COVID-19 has halted all live concerts, we decided to release this for the fans. This also introduces the current fantastic new lineup that not all of our fans have seen live yet cause of the actual situation. We will release three official videos in total during the promo of 'Born To Thrash - Live In Germany'. The film crew wasn't there to record all of the set but our movie will show the scenery behind the stage and the way we try to achieve our goals! So luckily they caught at least some of the stage magic that night. It feels so awesome that we can share this."

DESTRUCTION's latest album, "Born To Perish", was released in August 2019 via Nuclear Blast. The disc was recorded in January and February 2019 with V.O. Pulver (PRO-PAIN, BURNING WITCHES, NERVOSA) at Little Creek Studios in Switzerland and is the first DESTRUCTION album to feature Randy Black on drums and second guitarist Damir Eskic. 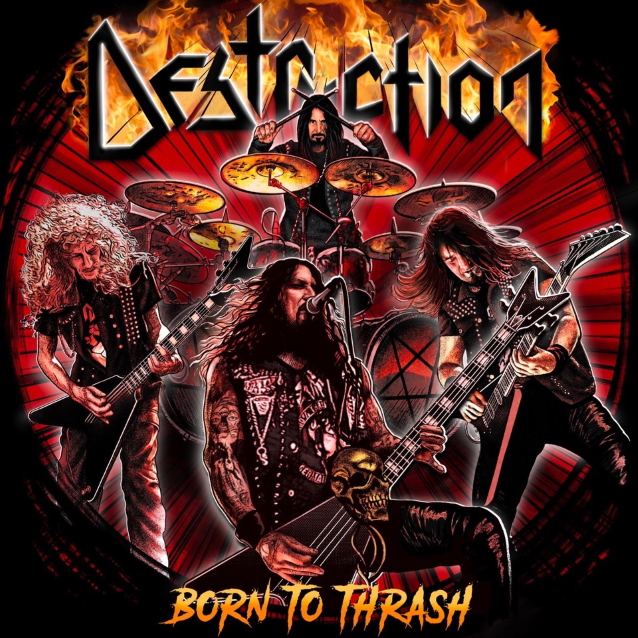