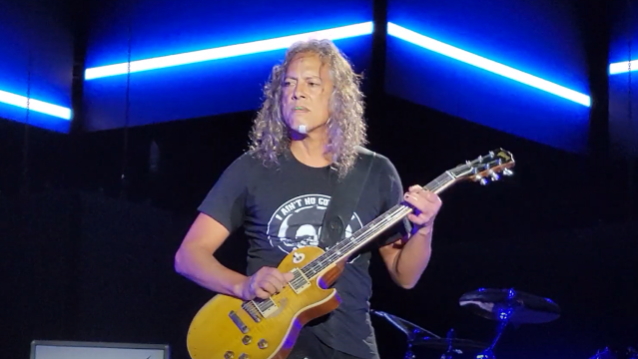 METALLICA guitarist Kirk Hammett botched the intro to the power ballad "Nothing Else Matters" during the band's headlining set last night (Sunday, May 29) at the Boston Calling festival in Allston, Massachusetts. After teasing a bit of "More Than A Feeling", a BOSTON song, Kirk screwed up the opening notes to the METALLICA classic before playfully falling to the floor. He then quickly stood back up and told the audience, "Sorry, guys. You're so kickass. I got distracted by how kickass you are," and restarted the song, which was the second-to-last track of METALLICA's 16-song performance at the three-day event.

"Nothing Else Matters" is one of the most popular songs from METALLICA's mega-selling 1991 self-titled album — also known as "The Black Album" — which was re-released last September as a remastered deluxe box set via the band's own Blackened Recordings. The song reached position No. 11 on the Billboard Mainstream Rock Tracks chart as well as top-ten positions on many European charts.

Last August, METALLICA music video for "Nothing Else Matters" surpassed one billion views on YouTube. It was the first METALLICA track to reach the milestone.

A totally new and different version of "Nothing Else Matters" appears twice in Disney's 2021 movie "Jungle Cruise".