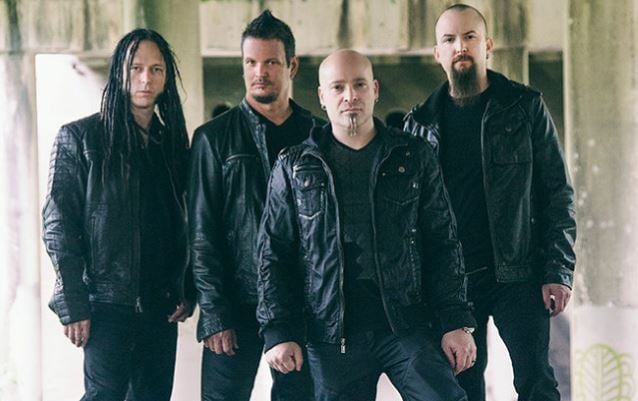 Watch DISTURBED In The Studio With Acoustic Guitars, Brush-Stroke Percussion

A short video featuring footage from DISTURBED's latest sessions at The Hideout Recording Studio in Las Vegas, Nevada with producer Kevin Churko can be seen below.

Singer David Draiman revealed a year ago that DISTURBED would record an acoustic EP before the band begins work on the follow-up to 2015's "Immortalized" album, and the presence of acoustic guitars and brush-stroke percussion in the studio clip certainly lends credence to that idea.

"Immortalized", which was the first DISTURBED album produced by Churko, became the band's fifth LP to enter The Billboard 200 chart at No. 1 — a feat shared only with METALLICA and DAVE MATTHEWS BAND.

In a 2016 interview with For Guitar Players Only, DISTURBED guitarist Dan Donegan spoke about Churko's contributions to "Immortalized". He said: "We took some meetings with some big-name producers, just to see what they had to offer. It was just a great, eye-opening experience to know that there's some geniuses that can kind of challenge you and throw these ideas out. When we met with Kevin Churko, we just felt something within the first hour, two hours that we were bouncing ideas off each other. It was pretty obvious that he just seemed like the right fit for us. We just felt like some of the suggestions he threw at us definitely helped elevate those songs to make them even hookier and riffier. It was just amazing. I didn't really want to leave the studio. After nearly three and a half, four months of recording, I was a little sad when we were done. It just felt like, creatively, 'Ah, man, I still want to keep going,' but we already felt like we had such a strong album."

DISTURBED has been confirmed as one of the headliners of the 25th annual Rock Fest, set to take place July 12-15 in Cadott, Wisconsin.