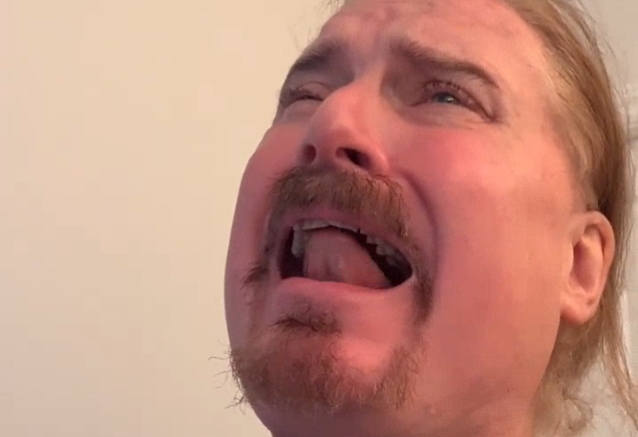 Video of DREAM THEATER singer James LaBrie belting out an a cappella version of the band's song "The Spirit Carries On" can be seen below.

LaBriecharges $75 for each of his Cameo videos for personal use $300 for a video for business use.

LaBrie's new solo album "Beautiful Shade Of Gray", is due on May 20 via InsideOut Music. Unlike previous LPs "Elements Of Persuasion" (2005),"Static Impulse" (2010) and "Impermanent Resonance" (2013),which were written and recorded as a collaboration with LaBrie's songwriting partner for over a dozen years, Matt Guillory, the new effort was tracked with Scottish musician Paul Logue, bassist and founding member of the multinational melodic metal band EDEN'S CURSE.

DREAM THEATER — comprised of Petrucci, LaBrie, Jordan Rudess, John Myung and Mike Mangini — was in the middle of a sold-out world tour in support of its 2019 last release "Distance Over Time" and the 20th anniversary of "Scenes From A Memory" when a global pandemic brought the world to a stop. The musicians found themselves at home, with LaBrie in Canada and the rest of the group in the States. As fate would have it, they'd just finished construction on DTHQ (Dream Theater Headquarters) — a combination live recording studio, rehearsal space, control room, equipment storage, and creative hive. With LaBrie in Canada, he initially wrote with the band via Zoom on a monitor in DTHQ. In March 2021, he flew down to New York, quarantined, and recorded his vocals face to face with Petrucci.