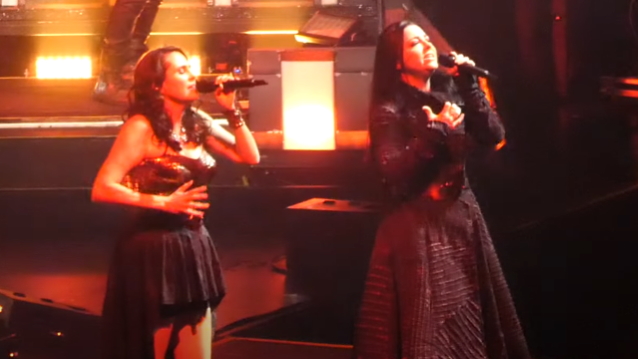 Fan-filmed video of EVANESCENCE singer Amy Lee performing the song "The Reckoning" with WITHIN TEMPTATION during the two group's joint concert on November 30 at Ziggo Dome in Amsterdam, The Netherlands can be seen below.

EVANESCENCE and WITHIN TEMPTATION's "Worlds Collide" European trek, which was originally planned for 2020 and later moved to 2021 and then to March/April 2022, finally kicked off on November 9 in Munich, Germany.

With almost every show sold out or close to selling out, the tour is proving to be one of the hottest tickets in rock this year. Anticipation is mounting for their incredible live shows after a summer of blockbuster performances.

Both bands have sold millions of records worldwide and have been at the forefront of the music scene for more than two decades. Fronted by two of the most celebrated voices in rock music —Lee and Sharon Den Adel (WITHIN TEMPTATION) — both bands have headlined arenas and festivals around the globe in their own right.

WITHIN TEMPTATION released its most recent single, "Don't Pray For Me" in July accompanied by a stunning video. They spent the summer touring Europe and supported IRON MAIDEN across the USA. They also joined forces recently with MAIDEN, bringing their own character "Genesis" into the band's world-beating "Legacy Of The Beast" computer game.

EVANESCENCE, meanwhile, has been touring the U.S. on a co-headline run with KORN, appearing at some of the major festivals, including Louder Than Life where Lee made a surprise guest appearance with TENACIOUS D, and seeing its breakout single "Bring Me To Life" re-enter the U.S. iTunes charts at No.1. They have also just announced a U.S. tour with MUSE for March 2023. Amy also took time out to record a breathtaking duet of an EVERLY BROTHERS track with Dave Stewart (EURYTHMICS).