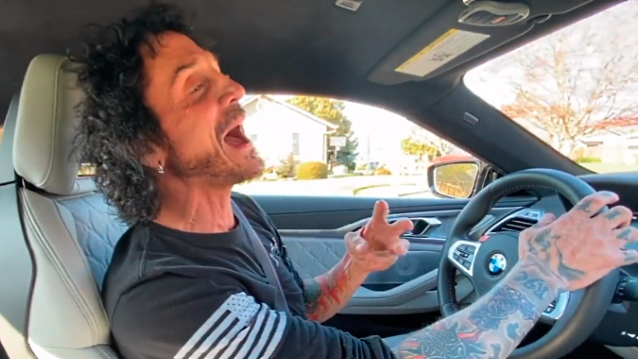 A new video of veteran drummer Deen Castronovo (THE DEAD DAISIES, JOURNEY, REVOLUTION SAINTS) singing the classic JOURNEY song "Don't Stop Believin'" while driving around in his car can be seen below.

Castronovo's 17-year tenure with JOURNEY ended in 2015 when the band fired him after his arrest for a variety of charges involving a former fiancée (including physical abuse, coercion, and unlawful use of a weapon).

Asked in a 2018 interview with "The Blaring Out With Eric Blair Show" how playing with JOURNEY changed him, Deen said: "I learned how to play for the song and to play as a team and remember that the song is the most important thing. I got to work with Jonathan [Cain] again and Neal [Schon], and it was like going home. I've known those guys since BAD ENGLISH, since I was 23. To be able to be 17 years in that band, it's a dream come true. I'd pinch myself. There'd be times I'd be walking with my drum tech in an arena and I'd just stop and go, 'Dude, I play for JOURNEY.' It was a cool thing, and I'm very, very grateful that they gave me that opportunity."

On the topic of singing two songs on JOURNEY's 2005 album "Generations", Deen said: "I listen back now and I cringe. I could have done better, you know – my first time singing on a record lead like that. It was kind of scary, but for me, I learned how to sing for the first time with a band as a lead singer. I'd never done that. I got more comfortable and got better as the time [passed] to where now, with REVOLUTION SAINTS... I'm definitely not Steve Perry. I'm definitely not Jeff Scott Soto or even Arnel Pineda, but I love what I do and I do the best I can. I'm a drummer that happens to sing. I'm not a lead singer. For me, drums are my most important thing. With JOURNEY, I was able to sing two or three songs [live] to be able to give Arnel a break. I would never want to be a frontman. I could never be a frontman. That's scary, dude. If I'm going to sing, I want those drums around me. I want that protection."

Asked whether he misses being in JOURNEY, Deen said: "Totally. I miss the music; I miss my brothers. Of course. The touring was amazing. The band, the music, was amazing. I'm just grateful to be back playing. I never thought I'd play again, so being back and playing again and in the trenches is a great thing. But I miss playing those songs. I will always miss it. It was a big, big opportunity for me."

Great way to kick off an Easter Monday morning🐰⚡️
Sit back, turn it up and sing along with Deeno 😃😄😁
Just don't stop believin'🚀😘