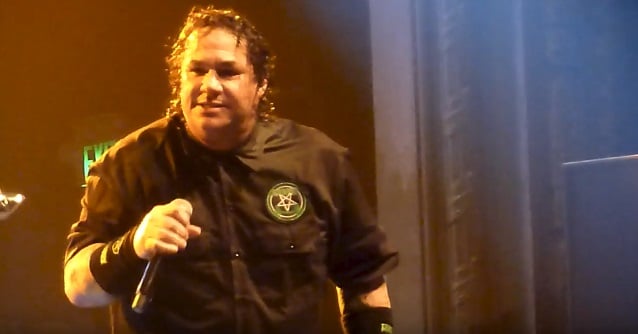 Fan-filmed video footage of EXODUS's February 25 performance at The Regency Ballroom in San Francisco, California can be seen below.

EXODUS frontman Steve "Zetro" Souza recently said that fans will have to wait until at least the end of 2019 before the band's follow-up to 2014's "Blood In Blood Out" album.

Asked about the progress of the songwriting sessions for EXODUS's new album, Souza told Metal Insider: "To be honest with you, you're probably not going to see that until the end, and you know what 'the end' is. [Gary is] gonna start [the SLAYER tour] in May and that's gonna take…I couldn't even tell you; I have no idea, I just know they [SLAYER] announced that that's their last tour, and realistically, we're not going to be able to record until that is finished. I'm speculating it's gonna take a year and a half or two years to do the one final thing, but I believe it's finished. Everybody knows what I know; just because I'm on the outside, I have no insight on that."

Souza continued: "[Gary] got home in October and they [SLAYER] haven't done anything since, and he has written EXODUS stuff, just nothing he's cared to share with any of us yet. I've heard a few songs that him and Tom [Hunting, drums] got together with early last year, and, to me, I'm, like, 'Oh my god! I come back in the band, and how long are we gonna take before we do another record?' But I understand he's the main songwriter here. Lee [Altus, guitar] does write some songs, but Gary's always been the main songwriter, so a lot of people are gonna be getting what they want back, because obviously there's gonna be no SLAYER at some point, so I guess he has to come back home [to EXODUS] for good."

Zetro added that he and his EXODUS bandmates "love" HEATHEN guitarist Kragen Lum, who has been filling in for Holt while he is on tour with SLAYER. "But I think the fans are very vocal and adamant about Gary coming back," he said. "We love SLAYER — they're our brothers — and we understand it's a better financial situation [for Gary], and I'm sure the final run is gonna be sold out everywhere."

As for when EXODUS fans should expect to finally see another studio album, Zetro said: "The end of 2019, to be realistic. We're gonna keep playing, we're gonna tour the wheels off of 'Blood In Blood Out'. Not even [just] 'Blood In Blood Out'. We're not naïve to ourselves — we know we can go out and play 'Bonded By Blood', 'Pleasures Of The Flesh', 'Fabulous Disaster' and people will come. They don't care — they love those songs. If we said we were coming around just playing 'Bonded By Blood', the place would be sold out."