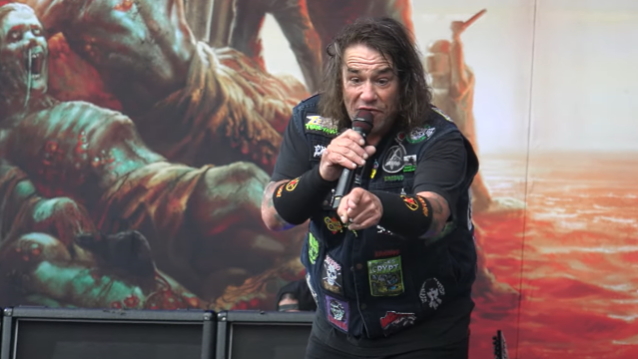 Fan-filmed video of EXODUS's July 13 performance at Hole 44 in Berlin, Germany can be seen below. The band's set included a cover of the AC/DC classic "Beating Around The Bush".

Last month, it was announced that EXODUS guitarist Lee Altus would be unable to join his bandmates on their European tour this summer due to "family concerns." Filling in for him is Brandon Ellis of THE BLACK DAHLIA MURDER.

Souza touched upon Altus's absence from the trek in a video update on his Zetro's Toxic Vault YouTube channel. He said: "Our guitar player Lee Altus won't be making this leg of the tour. It's gonna be Brandon from THE BLACK DAHLIA MURDER. He's going to be filling in on guitar. For Lee, there's some family issues that Lee needs to take care of for himself, so he's going to be staying back [home]. He isn't going anywhere. Sometimes these things happen. Family things happen. You can't always put [the band] first."